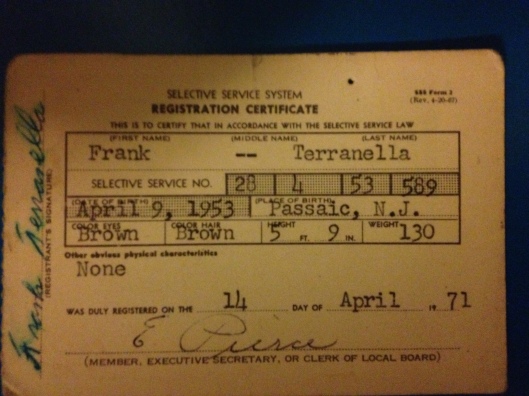 My son most likely will never receive a draft card – is that a good thing?

I was looking for something in a drawer in my bedroom recently, and came across a relic from the 1970s – my draft card.  It occurs to me that the Baby Boomer generation is in a unique position when it comes to military service. While we were the last generation of men in recent times who were saddled with compulsory military service, most of us didn’t serve.  So we are unlike our fathers, who mostly did serve, and unlike our sons, who may never have experienced the threat of compulsory service.

I think that every man my age remembers going down to the Draft Board and registering.  Those of us who were more fortunate were able to claim college or other exemptions.  The less fortunate got their induction letters, and were sent to war.

And then there was the lottery!  There were lotteries held every year from 1969 to 1975 (although no one was drafted after 1973). Before that, the U.S. simply drafted the oldest man first.  But beginning in 1969, the order of induction for people born in the same year was determined by a lottery based on your birthday.  So for example, in 1972, the year they picked inductees born in 1953, people born on March 6 got called first. I remember watching on television at the student center at my college as they picked the numbers in Washington. It’s hard to imagine a more tension-filled scene. There we were, a bunch of 18 year olds waiting for word on the future of our lives.  There was constant talk during this time about doing away with college exemptions. So having a low lottery number was seen as guaranteeing that you were going to Vietnam (or a death sentence by some more hysterical guys).

A friend of mine in this group at the student center heard his birthday called as number 008.  He began to sob, and a few days later, rather than wait for induction into the Army, he enlisted in Navy ROTC.  I was one of the lucky ones. My number was 234. I’ll bet that you can ask any man who participated in one of these draft lotteries, and they could tell you today what their number was 40 years ago.

The point of this is to show that men of my generation faced a lot of the stress of anticipation of military service. In fact, since compulsory military service was non-stop from World War II until 1973, all Baby Boomer boys were brought up with the certainty that they would be in the military some day. Everybody served. In fact, one of the most pleasant surprises of my life was the end of the draft.  It literally changed the course of the lives of every young man in the United States.

By contrast, my son merely had to register for the draft. I think he may have done it online!  It was completely stress-free because there was no chance of being compelled to serve.  He could enlist if he wanted, but that was up to him.

It’s certainly true that old men wage war with the lives of young men. It’s always been that way, and always will be.  So my perspective on military service is different now than it was when I was younger, and I was the one who would be called to serve. While I don’t want our young men and women (yes it must be women now as well) to have to go to war, I do think that compulsory public service is a good idea.  I think that the lucky break that many Baby Boomers got in not having to serve their country resulted in a stunted sense of community and laid the ground for all of us being labeled the “me generation.”  But that’s a discussion for another day.

Still have your draft card? Scan and send it to us in the comments below.