Men will be boys. Photos by Julie Seyler

We’ve all heard of the midlife crisis. And if you’re in your 50s, and you haven’t had yours yet, you’re overdue. Anyway, I think that women and men have different midlife crises. For men, it usually comes with the first scent of old age. You know, the sudden inability to remember names, movie titles and even words. Or if the guy is an athlete, it’s the demonstrated failure of his body to do what it used to do. Whatever the trigger, the response is usually the same: In a vain attempt to regain their youth, men revert to behavior they abandoned in their mid-20s. They get drunk, they gamble, they buy expensive toys, and they fool around with women who are not their wives. Not everyone does all of these, but just about everyone has the inclination.

When 50-something married men begin to act like they’re single, this can be disconcerting to their wives, to say the least. But it truly has nothing to do with the wives. The inclinations don’t only hit men in bad, or tired, marriages. I think they’re primal and hard-wired into men’s brains. 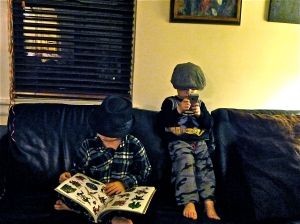 Men and their games.

What separates the gentlemen from the cads is the response each man has to this inclination. Some men give in and go off for the full ride, including bedding younger women. Divorce soon ensues, and I have actually heard these men brag that, “I traded up from the 1955 model to the 1977 model.” Other men, in the immortal wisdom of President Jimmy Carter, have lust in their hearts. I will confess to being in this group.

As I get older, I have found that intimacy is what’s really important, not just orgasms. There’s nothing wrong with orgasms, it’s just that both men and women can, and do, have them without any intimacy with their partner. This is ultimately very lonely and unfulfilling. So in recent years, I have sought out intimate, non-sexual relationships with a number of women friends. This is something that women do easily without thinking about it. Women tell their women friends intimate details of their lives freely, and it’s no big deal. For men – it’s a big deal.

In the film “When Harry Met Sally,” Billy Crystal’s character is a young man who opines that men and women can never be friends because sex always gets in the way. By that he means that he believes that a guy can’t look at a woman without thinking about getting naked and having sex with her. My experience is that it’s much easier to have an intimate friendship with women in my 50s than it was in my 20s. And that’s a good thing.

My wife has been incredibly understanding as I have begun to have long meals with old girlfriends, work colleagues and a variety of other amazing women. While the conversations have at times been intimate, they have never been orgasmic. I have been proving Billy Crystal wrong for a decade.

In many ways, I think it takes until he’s in his 50s for a man to grow up. The midlife crisis is like a second puberty. The trick is to get through it without making a fool of yourself. And as we all know, there’s no fool like an old fool.

3 thoughts on “Men in Midlife: Puberty Revisited? Or a Time to Grow Up?”