Bob Smith, confessional, Men, The Write Side of 50

BY BOB SMITH
I’ve been practicing law for almost 30 years, and am now a partner in the intellectual property group of a large New Jersey law firm. Though the path to my legal career was paved with menial jobs, I learned something from every one of them.

Coming from Cresskill, an affluent Bergen County community that had at least four country clubs within a five-mile radius, I had a lot of golf-centric jobs in high school: caddie, locker room shoeshine guy, and finally, greenskeeper.  Being a caddie taught me a lot about golf – how to play it well (at least in theory, as I never learned to play well myself), the reassuring fact that most people play quite poorly, and the surprising fact that, regardless of how prestigious or well-respected the player, he or she is often not above cheating in order to win.

As a shoeshine guy in the locker room I learned that fat old guys, no matter how rich, still look pathetic and saggy with their clothes off. And as a greenskeeper, I learned how peaceful it is to walk the course in the predawn darkness, sweeping the greens with a long bamboo pole to knock the dewdrops down so they don’t burn the delicate grass when the sun comes up. 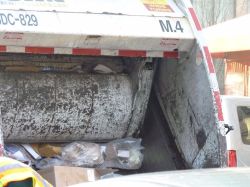 Riding the back of a garbage truck afforded life lessons. Photo by Julie Seyler.

Then, during my last two summers in college I became a garbageman. I hauled smelly barrels of trash through the backyards of some of the finest homes in Tenafly. I learned many things at that job, including that people often threw away perfectly edible cookies and cakes; that if you drank too many of the free beers available in the summertime you lost all ambition (it took twice as long to finish the route), and that if a mass of rice in the trash was wriggling, it wasn’t rice at all.

I also learned what it meant to be invisible. One day I was on the back of the truck with one arm hooked in the metal grab bar, carelessly swinging back and forth with the rhythm of the ride as the truck swung around turns and jounced over bumps.  I was watching a well-dressed guy in a white shirt and tie who was driving behind us, drinking coffee and glancing at his watch and trying to see if he could somehow pass the lumbering truck.  I was smiling at him and gesturing with my free hand for him to slow down; lighten up, but he looked right through me.  I didn’t exist in his world.

Then the truck braked suddenly, the air brakes exploding with a series of percussive hisses as the driver pumped them to make us stop. I was pulled back against the arm hook, toward the front of the truck, but I kept my eye on Mr. Executive, who was deep into his coffee and didn’t notice our rapid deceleration.  I waved again, screaming at him at the top of my lungs to stop. At the last second, he looked up, saw the back of the truck approaching too fast, and jammed on his brakes.

His car screeched to a stop, maybe a foot short of the blunt metal edge of the truck’s hopper – one more second of inattention, and he would have gone right under us.  The roof of his car, not to mention his head, probably would have been ripped off.  I could see the pulse of a near-death adrenaline jolt in the wide-eyed shock on his face.

He glanced at me, and I smiled, raising my hands and eyebrows in a “close call” acknowledgment, expecting him to laugh. But he completely ignored me, turning back to his coffee as if I wasn’t there.