Heading out on day one.

I’ve just returned from a four-day trip to England and Scotland. My older son and I went to visit my younger son, who is studying and working at Durham University, just a stone’s throw from Edinburgh, Scotland, in Northeast England. But this is not about the flowing-amber-infused congeniality of the English pubs, nor the 1000-year-old castle that crowns the cobble-stoned city of Durham. It’s not about the massive, Romanesque, Durham Cathedral (it’s bigger than the castle), considered by Brits to be the “greatest Norman building in all of England.” (And was Hogwarts for the first two Harry Potter films.) Or the cool, kilted, Scotsmen of Edinburgh. No going on here about the bloody black pudding (oatmeal with pig’s blood), the sketchy haggis (oatmeal with sheep innards), the foot-long, fried fish, and the accompanying super-fried chips. 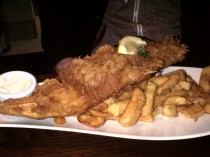 I am not going to carry on about this amazing fish and its chips.

Nope – I won’t but mention how much fun it was to glom on to, throw back some pints with, and be on holiday alongside, my two most favorite people.

This is about the beauty of the four-day trip. Especially a four-day trip across the Atlantic. This is my second one in almost as many years (Julie and I traveled to Madrid, Spain last year for four days), and it’s shaping up to be my new way to go.

I’ve also seen their heads tilt in a way that ponders the sanity of flying so far to spend only four days in one place. Therein lies the appeal: Only one place. Only four days.

This older me has come to love travel more than ever, but also loves staying home. So here’s the fix: Only four days. Only one place.

It’s long enough to be called a “trip.” There’s less heavy lifting (one suitcase, no checking), less groundwork (one hotel, one check-in). And numbers are crunched (that overnight flight to Europe gives you your fly-time back when you get there).

And perhaps best of all – the preplanning is simpler and bodes well for us 50-somethings, especially if, as I did, you spent decades arranging all the family vacations. (That was often a four-day commitment in itself.) To indulge in all things about one place affords no obligations to make the next train, plane, or inn. And the pre-prep is fun! There are less days packing, less list checking, so brain power is better spent on that anticipatory joy of counting the days until take-off. Actually, the planning becomes half the fun, because a four-day trip is half the planning. There’s little intrusion from that pre-trip dance around all the stress that comes from planning, planning, planning, and then hoping all goes as planned. And out of respect for our boomer-brain’s cognitive wind down, there’s less to remember.

And then there’s my fellow travelers’ assurance – my kids wanted to go. It was short. Because as much as my boys love their mom – a getaway with the 58 year old, who has boundless energy to do every little thing, only partly melds with a 23 year old, and a 27 year old, who are happy to do just some things, including sleeping through breakfast. Said my older son: “Actually a three day trip would have been fine.”

3 thoughts on “The Long, and the Short, of the Four-Day Trip”