It is sometimes hard to swallow that I am approaching 60.  On the other hand, it is always great to know that I have had some friends for over 40 years.  We still manage to look like we are 13 years old to each other.  So I decided to see if I could entice one of these old-time buddies to come with me on a four-day getaway. (Yes, like Lois, I too, am a fan of the four-day trip.) I dangled Cardiff, Wales and Sofia, Bulgaria in front of her, and she jumped at all of them, but ultimately we opted for ease, which meant San Juan, Puerto Rico. 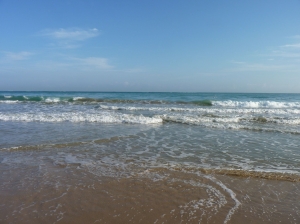 I have never been, but it is the perfect destination from New York City. It’s a four-hour flight. There is sun, sand and sea. And minimal time change. I did some research, found decent flights, a cute boutique hotel on the beach, and sent my girlfriend an e-mail with the info. Her reply: “Book it Dan-O.”

Our flight was scheduled to depart from JFK on March 6 at 7:00 p.m. Until it didn’t. When I got to work that morning American Airlines had graciously left me a voice mail that that flight had been canceled due to the coming snowstorm. I frantically got on the horn with them, and after an hour on hold, a lovely rep answered, and offered us the opportunity to fly out on the 3:50 flight. She was so nice. She waited while I called my friend, who was in the middle of a meeting, to see if she could scramble her fully-booked schedule so we could rendezvous three hours earlier than originally planned. So we found each other on the front end of the West 4th subway station at 1:00 pm to follow through with our plan of taking the train to the plane. It’s a great deal for $7.50.

We sailed onto that plane five minutes before the doors shut behind us. We were on our way to the land of mojitos!

It was a perfect four-day trip, despite a weather pattern of sun every morning, with clouds rolling in religiously by 2 p.m. We were totally indolent on day one – never leaving the beach at the Water Beach Club Hotel; semi-indolent day two – taking a walk for massages, and heading into Old San Juan for dinner; and downright ambitious on day three, with renting a car from Charlie’s so we could check out the rain forest at El Yunque, the beach at Luquillo, and then a drive into Old San Juan for our final dinner. We even managed to change out of our bathing suits and into our clothes in the car. 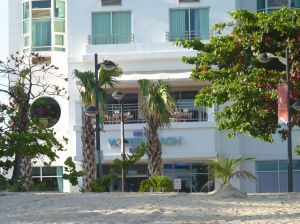 A street in Old San Juan.

Sunday morning we were on the beach at 7:30 in the morning to max out on our last few hours before the 2:15 flight home.

2 thoughts on “My Dish on Puerto Rico: Easy, Breezy, with Mojitos on the Side”