I have always embraced a camera. Out of all my high school friends, I think I am the one with the most captured memories on film. It could be true for my college years, law school years, my Washington D.C years, and the last 24 years in Manhattan.

In the beginning, I used film because we only knew film. We built our camera knowledge on trademarks like Kodak, and the instant snapshot of the Polaroid. Remember Bob’s family had a Kodak Duaflex.

Then digital cameras began infiltrating. I railed against them. I swore my loyalty to film, and I managed to remain a hold-out until the near end, when it was impossible for an amateur to find film, let alone find anyone who could develop it, or would develop it at a reasonable price. Now I cop to the fact that I became a convert.  Nothing beats the ease of digital and its mechanics that allows for thousands of images with a click.

And not only did technology change, I changed. Where I used to only take photos of friends, anywhere at anytime, I have moved towards nature and buildings; city streets and sunflowers. I am mad about light and color and composition and beauty and ugliness. Here are three of my favorite photos:

This was taken from the (now battered) deck at Allenhurst Beach Club, about two or three years ago. It was early in the day, and I knew it was going to be a gorgeous one. The sky told the story. Every time I revisit this photo, I see space, freedom, tranquility, and the anticipation of a perfect day at the beach.

In the middle of February, I was waiting for a downtown bus in front of McSwiggans, a bar on 2nd Avenue. I was staring into the front bay window, and was struck by the antic energy created by the competing beer advertisements. Out came the camera. I had to try to nail it. 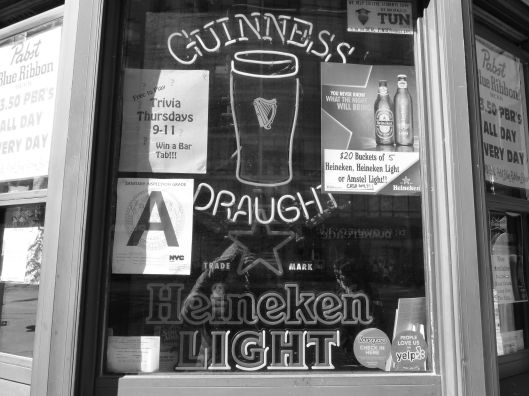 I do not know why, but I have always been fascinated by old cemeteries – those where the tombstones are dated anywhere between 1600 and 1900. There is sculpture in the alleys lined with mausoleums – mansions to hold the dead. This was taken at Pere Lachaise Cemetery in Paris where Jim Morrison is buried. It was around 10 or so on a Sunday morning. I never did find Jim Morrison. 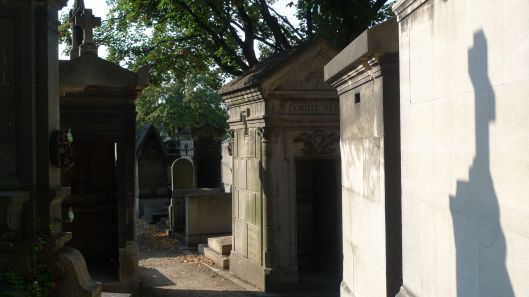