Bob Smith, Boiler cleaning, confessional, Men, The Write Side of 50 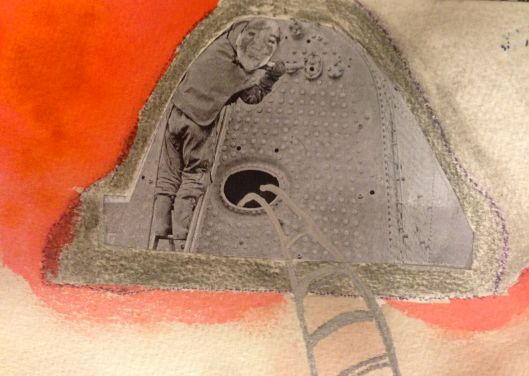 Bob and the boiler

When my brother’s friend told us he knew a guy who would pay us $50 a day to clean boilers at some factory in Hackensack, it sounded too good to be true. It was the summer of 1971, I was 16, and that was roughly quadruple the then-prevailing minimum wage of $1.60 an hour. How bad could it be? We eagerly agreed.

The factory was a series of drab brick buildings in an industrial section of town near the railroad tracks. A grizzled guy in a uniform sat in the guardhouse – an upended glass and metal coffin in the middle of the driveway. He looked up from his magazine just long enough to direct us to the “power house,” a two-story brick building at the back of the property.

In front of the power house there were eight monster gas meters with round riveted faces the size of pizza pies. As we stood on the concrete platform waiting for someone to answer the buzzer, we could hear pressurized gas hissing in the pipes.

“You smell anything?” Jimmy asked, looking askance at the meters.

The foreman brought us into an open room where two 12-foot high, 12-foot square, concrete structures squatted, side by side, under long fluorescent lights. The hulks had “Boiler No. 2” and “Boiler No. 3” stenciled on their sides in alarming fire-engine red block letters.

“Okay guys, you’ll be starting on No. 3 today,” said the foreman. His name was Steve, and he ran this business cleaning boilers. But Steve didn’t actually do any work. He just supervised hapless suckers like us.

Steve quickly showed us what to do and hurried away.

“I got another job going across town. I’ll be back at lunchtime with sandwiches and sodas.”

It was simple. You crawled inside the boiler through a cast iron access door barely big enough to allow one person to wriggle through, carrying a narrow brush on a stick and a work light on a long extension cord. Once inside the boiler, you laid on the pipes that spanned the length and width of the unit, and used the brush to sweep piles of soot off the top surface of each pipe.

You started at the far end of the boiler, about eight feet from the access door, and worked your way down the length of the boiler. After knocking the soot off all the pipes, you opened another access door at floor level and shoveled the grimy, black powder into barrels for disposal. (This being New Jersey, probably in a landfill near a major source of drinking water.)

The soot built up on top of the pipes because the boilers were really gigantic ovens. When the array of gas burners at the bottom were fired up, the space inside was a blazing, white-hot inferno. That fact was not lost on me as I lay at the far end of the unit, far from that tiny access door, hoping the guy in the control room didn’t forget No. 3 was supposed to be down today for cleaning.

Then there was the soot. Steve insisted that before we went into the boiler we put on paper breathing masks, purportedly to prevent us from breathing in the black dust. However, within 15 minutes, the mask was useless – a sodden mass of soot, saturated with sweat. You had to pull it off your face to breathe at all – dust be damned.

By the end of the day, our clothes were heavy with embedded black ash, our hair matted tangles of soot, and our spirits broken. Like the Peanuts character Pig Pen, we exuded a cloud of dust with every step.

When we got home, I showered for a full half hour, watching the water run black as I scrubbed that persistent blackness from every pore, follicle, and crevice of my body. I spat and blew black from my nose for a week.

Being successful at a job, or at anything in life for that matter, often is a matter of just showing up. But sometimes not showing up is the better way to go.

Jim and I didn’t return for day two in Boiler No. 3.