Flash bulb vases. Made and photographed by Bob Smith.

At the old family house in Cresskill, I found a dusty yellow box bearing the name Kodak DUAFLEX IV Flash Outfit. It was that brown box camera that I recently wrote about – the one Mom had used to take our pictures when we were kids. Tucked away inside was the original receipt dated March 1956 for $22.85 – starting with a $10 deposit. Evidently, Mom and Dad didn’t have enough nickels to rub together to buy it all at once. 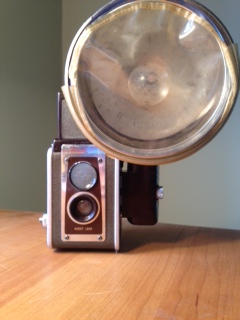 I decided to get it working again and perhaps recapture some of the magic that camera had seen. A haze of dust had accumulated on the inside of the lenses over the years, so first it had to be taken apart and cleaned. The Duaflex is a simple leather-textured cardboard box with lenses mounted on the front and a viewfinder through the top. Nothing to it.

Well, not completely. I’m mechanically challenged, so once I take something apart, there’s a good chance it’s not getting put back together the same way again. Within 25 minutes, I had screws the size of mustard seeds, lozenge-shaped lenses, metal springs and parts, and the three sections of the leatherette box spread across my kitchen table. Cleaning the lenses took 30 seconds – dab alcohol on a cotton swab, three swipes per side. Done.

Two tense hours later, after numerous cocked screws, a slightly bent viewfinder, and one ugly crease in the cardboard box where I had jammed on the faceplate at the wrong angle, Humpty Dumpty was back together again, nearly as good as new.

But I couldn’t snap pictures yet. Kodak still makes film wide enough for the camera, but not mounted on a spool that fits the brackets on the Duaflex IV. My local camera shop guru cheerfully explained that I could easily adjust the diameter of the plastic spool so it would fit inside the camera housing.

Back to the tools. With X-Acto knife and metal file, I sliced and shaved a 16th of an inch off the perimeter of each end of the film spool so it would fit into the camera. The hour was laced with epithets and sliced fingers, but at the end, that spool had roughly rounded ends that not only fit inside the camera, but actually (with some effort) rolled to allow the film to advance. Photo ready!

Not. You needed a flash for indoor shots. Luckily the kit included the flash attachment, complete with a half dozen old-fashioned flash bulbs. Of course, installing batteries in the flash unit also required a screwdriver, but there was only one screw holding the hard plastic housing together, and even I couldn’t screw up unscrewing that.

Family photos, courtesy of the Duaflex.

I was finally ready for a test shot of the family dog. The flash was accompanied by a crackle-popping sound like a small explosion, and the inside of the bulb turned hazy and gray with smoke – one step removed from flash powder. Its hot surface had partially melted and was bubbled with caramel-colored burnt spots. The dog was so startled, he spent the next hour cowering under the kitchen table.

I moved on to human subjects, snapping my wife and son, my son with his girlfriend, and even one shot of Mom. With each snap, I reflexively looked down at the camera, seeking digital gratification. No such luck. Once you finished a roll, you sent the whole thing away to be developed and wouldn’t know for a week or more if any pictures had turned out well.

As it turned out, none did. Apart from one backyard shot of the dog (which has gone missing – the photo, not the dog, who’s probably still under the table), they’re all dark, out of focus, or both. Either my technique, or the old equipment itself, was not up to the task.

But Maria liked the spent flashbulbs. Online she learned that people make vases out of light bulbs, and suggested we try the same thing. You removed the metal contact at the end of the bulb to create the opening, which was right up my alley: breaking things. I grabbed the nubby metal tip with pliers and twisted. It made a satisfying glassy crunching sound as I turned it back and forth to free it from the edge. Then I pulled the nub out of the bulb, still trailing gossamer traces of filament. I jammed a screwdriver into the hole, and rotated it to smooth the opening and clear away the underbrush of cloudy stuff filling the bulb. I shook out the tiny glass fragments, and the bulb was ready for mounting.

With synthetic modeling clay, we fashioned circular disks and baked them for 10 minutes to make them hard. Then we glued one onto the bottom of each bulb to create a flat platform, and the transformation was complete: each flashbulb was now a freestanding bud vase. Those unique handmade vases are now proudly collecting dust on a shelf in our family room.

The old camera had given us lemons, and we made more lemons.