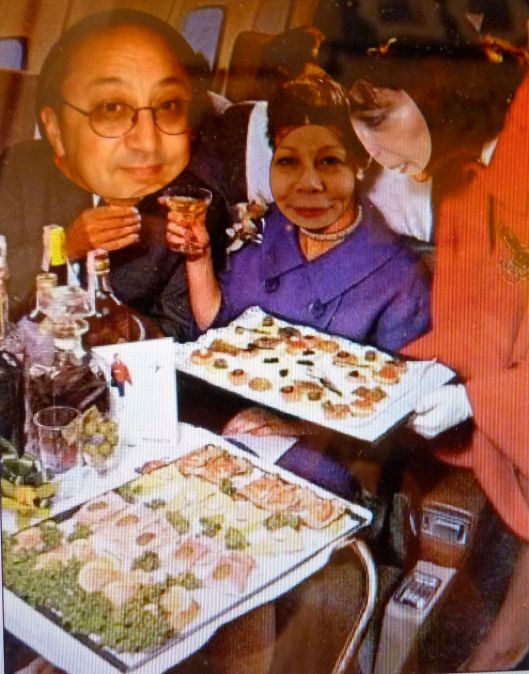 Flying in style, back in the old days. By Julie Seyler.

A lot of what makes those of us on the right side of 50 special is the fact that we can remember the world of 50 years ago. There is an advantage to being able to take the long view of current events. For example, I think that we are uniquely situated to see the broad pendulum swing of majority political thought from the liberalism of the 1960s to 21st century conservatism. If you’re in your 30s, you have never experienced a world where liberal thought was dominant. It’s only when you’re as old as we are that you have the perspective in which to view debates about universal health care, gay marriage and equal rights. We have lived in a world where a president from Texas enacted government-provided health care for senior citizens. That same Texas president signed into law sweeping civil rights legislation that transformed America. With a stroke of the President’s pen, it became illegal to discriminate in employment and housing on the basis of gender or race. You have to be on the right side of 50 to remember classified advertising in newspapers where the columns were headed “Help Wanted – Male,” and “Help Wanted – Female.”

Contrast that with the current political climate out of Texas. Governor Rick Perry would consider President Johnson a socialist. No one under 50 can remember a time when Texas was a solidly Democratic state. They can’t imagine a time when that might happen again. But we on the right side of 50 know that the pendulum that swung all the way to the right can just as easily swing back to the left. Look at Vermont. In 1936 it was one of only two states that FDR did not carry (Maine was the other), and today Vermont is a bastion of liberalism.

I bring all this up because I recently traveled to Dallas and, like my colleague Bob Smith, visited the old Texas School Book Depository that is now a museum built around a crime scene. I walked through all the memories of that time.I choked up again as I watched Walter Cronkite report the president’s death. It brought me back to that time, nearly 50 years ago, when America lost its innocence. Just as 9/11 changed America forever, so, too, did November 22, 1963. But you have to be old enough to remember pre-assassination America in order to understand how profoundly this event affected the American psyche. The world depicted so accurately on the television series,”Mad Men,” disappeared by the end of the decade.

And nowhere is the change so apparent than at our airports. First off, in 1963, only a small fraction of Americans traveled by air. People routinely took the train to Florida, and the ship to Europe. Those who did travel by air were treated to an elite world of privilege with stewards and stewardesses (terms borrowed from the world of luxury steamships). Air travelers could walk directly to their gate without passing through any security. Then came the first hijackings to Cuba, and with it came the first metal detectors. And of course, after 9/11, airports became a world of shoeless, beltless passengers being patted down by Homeland Security agents.

On my flight out to Dallas the captain made an announcement that one of our female flight attendants (no longer stewardesses) was on her last flight after 49 years on the job. That’s right, this woman began as a stewardess for the now-defunct Eastern Airlines in 1964, and after that company folded, she moved to American Airlines. The entire cabin gave her a round of applause as she and her beverage cart made the final victory walk up the aisle. And while watching at this youthful-looking woman, who has to be older than me, I wondered what stories she could tell of her 49 years in the air. She began work at a time when airline passengers were a pampered elite, and lived to see the era where passengers have to pay for a cookie. This woman has perspective on air travel – the kind of perspective that comes with long experience.

And so I guess what all of us on the right side of 50 can claim is perspective. We can see the forest, not just the trees.  Maybe there is wisdom in age after all.