Concepts, Idaho, Jeannette Gobel, Priest Lake, The Write Side of 50

The years spent fixing up our ramshackle cabin, nurtured a 30-year marriage.

A sudden realization came to me not long after we purchased our little cabin up at Priest Lake Idaho. This place was not like any standard construction. It was a “Frankencabin.” The inspector’s report must have been 10 pages long. It hit me that a project of this magnitude would be great for our 30-year-long marriage. Not just the common goal of refurbishing the place, but the romantic aspect as well. The benefits have definitely outweighed the negatives. Would most people take on this project? I think not.

Our family had been spending lots of vacation time up at Priest Lake in northern Idaho. This lake is probably one of the most gorgeous spots in the US. My grandparents used to bring my mother and her sisters up in the 1930s. I visited almost every weekend as a child growing up in the ’60s and ’70s.

In the early years of our marriage, we camped. When camping felt like hell as we aged, renting cabins became the norm. We loved everything the lake had to offer. Hiking the many trails, exploring the lake by power boat, or kayaking can fill many a day. One ritual we always look forward to is the boat ride through the mile-long thoroughfare between Lower Priest and Upper Priest Lake. More times than not, we have seen moose drinking at the shore, and ospreys tending to their young in treetop nests.

Financially, it made sense to buy this place. My husband Kevin and I bought the cabin when our youngest was a senior in college. We had been paying rent for the kids while they were at the university. Since we weren’t going to have rents to pay in the college town anymore, we should invest this money in a lake place of our own.

Since it is a summer-use-only place, we anticipate with much excitement, the precise weekend in late May when we open it up for the season. Not only is it an event that has to be done, it is a great romantic weekend. Closing up in the early autumn is also a time for an intimate dinner at nearby Elkin’s, a four-star restaurant. 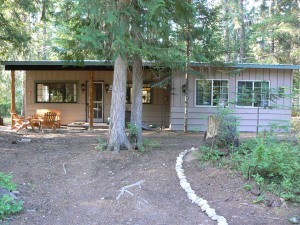 Built with a little spit, a little spackle, some steak and chardonnay.

I believe that a marriage survives on chemistry and common goals. We still have the chemistry, but the cabin sure provided us with many challenging goals and priorities. First up was rebuilding the exterior. Priming and painting took one full summer. But does a grilled steak and a bottle of red wine taste like heaven after a hard day of labor. The place looks like a real cabin now.

Next up was repairing water damage, and painting the interior. That was another feat of tenacity for the second summer of ownership. I believe we were more motivated by scrumptious meals, and wine on the deck, or a scenic hike on one the thousands of trails. Other projects have included tree felling, a new roof (which we hired out), bringing the fireplace up to code. We rest easy now knowing that a fire in our woodstove won’t result in a conflagration in the forest. I believe we had grilled salmon with chardonnay the night that work was over with.

Just last year, our entire section of the lake got sewers. (Yay! No more holding tank.) We had plenty of prep work for this to happen. Estimates had to be procured, decisions made as to which contractor won the bid, and then the actual work could begin. Is it ever a relief to flush the toilet, and not worry about backups in the pipes anymore.

On our way to the local hardware store for project supplies, we followed a young moose for a quarter of a mile until he disappeared into the forest. One last project to complete the big hook-up was to connect the cabin plumbing to the actual line. Kevin, being amazing, did this himself. It took most of a week. Boy, did we eat well that week. Cocktails by the fire pit outside at sunset tasted especially decadent as we watched a doe slowly make her way through our front yard.

We have certainly reaped many benefits from ownership of our lake place. Starting with a nurtured marriage. Not to mention projects accomplished, the physical activity, creative cuisine, and a place for retreat from the stress of life.