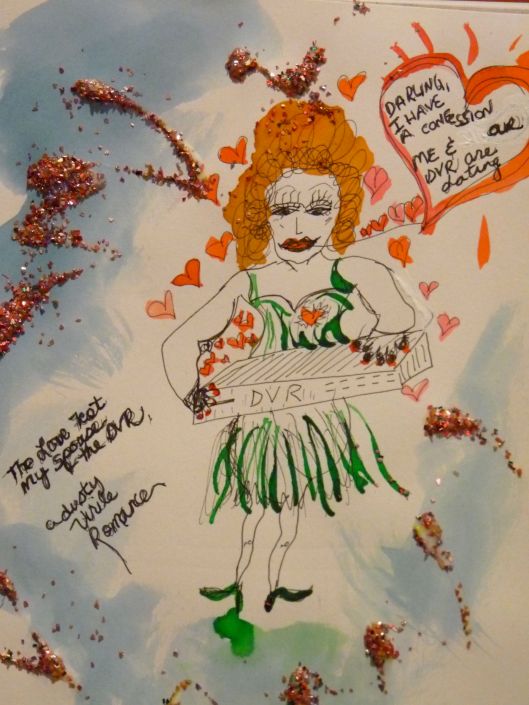 Darling, I have a confession. Me and the DVR are dating. By Julie Seyler.

Modern video technology has revolutionized the way we watch television. The digital video recorder (DVR) has made it so easy to record television that many people no longer watch anything “live.” It’s easier to watch later (even just 20 minutes later), and then zip through the commercials.

This has had two unanticipated social repercussions. First, since most people do not watch television when it is broadcast, it’s no longer possible to have water-cooler discussions at work of the previous night’s programs because many people have not yet watched them. And a related phenomenon is the new form of marital infidelity called “video cheating.”

Back before video recording, we all had to watch the shows live or not at all. We all found out together who shot JR. You either were in front of a television set on Tuesday, August 29, 1967, or you missed the series finale of “The Fugitive,” and probably still don’t know the fate of the one-armed man. The VCR brought some freedom from the network schedule, but the DVR made recoding shows to watch later (so-called “time shifting”) a way of life. And so today, we rarely ever watch live television except for sports and news.

But with great power over the television viewing experience came great responsibility. The shows you formerly watched together with your spouse now could be watched without him or her. This led to a silent pact wherein each partner agreed to wait for the other before viewing so that the former live TV sharing experience could be replicated. While the rest of the world was on week five of “Mad Men,” in our house, we could be on week four, or even week three. But as long as we watched it together, it didn’t matter.

Breaking the pact could be as simple as watching the show live while your spouse is out. The absent spouse comes home, and the following scene is played out:

Spouse 1:  “You missed a great episode of ‘Burn Notice.’”

Spouse 2 (voice rising): “What do you mean I missed it? We’re supposed to watch that together. Why didn’t you wait for me?”

Spouse 1 (apologetic): “I’m sorry, the DVR changed the channel I was watching and started recording ‘Burn Notice.’ What did you want me to do, shut off the TV?”

(Spouse 2 storms out of the room to pout.)

Video cheating – it’s a terrible thing that technology has wrought. And don’t get me started about spouses hijacking the Netflix queue and refusing a friend request from their spouse on Facebook. It’s a miracle the divorce rate isn’t 80%.