Concepts, Fish, Lois DeSocio, The Write Side of 50 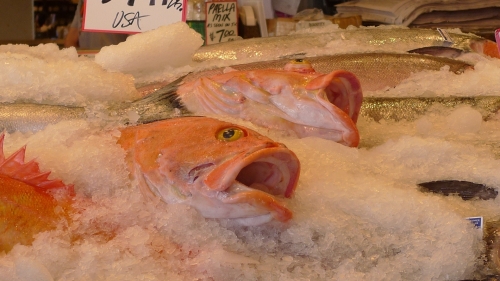 The two fish pictured above, whether staged for sale, or captured in their final moments, gills packed, mouths agape in a gasp for “air,” moved me with its perceived spirit of, “Don’t give up!”

I’m drawn to fish faces, whether viewed in tanks, or when snorkeling and swimming with them. There’s something in their eyes. Perhaps because they are always open.

When my kids were little, we had a goldfish, named Cootie, which had a nice big tank all to himself. (We decided it was a he.) We loved him. He would swim to the edge of the tank and nostril-up to the glass whenever we were in the room, and stay there. I assumed he was happy as a clam, because he was always smiling. And he lived so long, that he grew to be the size of a carp. When he died, we buried him in the back yard.

There are barrels of studies that suggest a connection between fish and people, including:

We owe our heads to fish. (In utero, our eyes are on the side of our heads.)
Fish were the first to have a backbone.
They make friends.
They help each other when one is in danger.

So, let’s give a Friday salute to the two fish out of water above, which were undoubtedly sold, then eaten. Let’s, instead, weigh them on the scale of our homogeneity of the human kind.