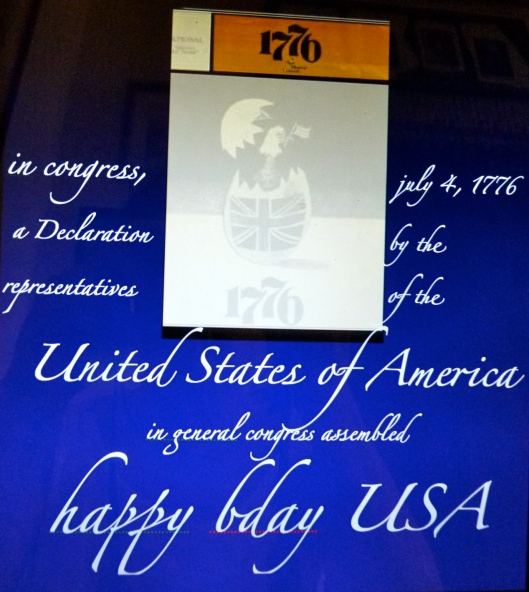 I was a history major in college, and I still read more books in the history genre than any other genre. I think that knowledge of history provides the same sort of long-view perspective that age does. I also have been a lifelong lover of theater. And so it is not surprising that one of my favorite musicals, “1776,” combined my love of history and theater. The musical concentrates on the days prior to the signing of the Declaration of Independence.

Writer Peter Stone did a masterful job of crafting an enjoyable show without sacrificing historical accuracy. Oh sure, he combined some characters, and took some liberties with the timing of events, but he managed to preserve the essence of the story, and got all the major details right. Sherman Edwards wrote the great score.

The show was on Broadway in 1969-1972, in anticipation of the approaching bicentennial in 1976. William Daniels played John Adams, Ken Howard was Thomas Jefferson and Howard DaSilva was Ben Franklin. The trio reprised their roles in the 1972 movie.

I wish I could say that I saw it on Broadway, but I didn’t. My first contact with the show was a production at my college. I was briefly the theater critic on my college paper, and “1776” was one of the shows I reviewed. Needless to say, I gave it a rave review, and then enjoyed the film version as well.

I bring all this up because there is July 4th tradition at my house. Every year since the DVD of “1776” was released more than a decade ago, I play the movie on the morning of July 4th. It serves to remind me, and my family, why we have the day off. It also serves to remind me what is good about this country. It is so easy to lose sight of the founders’ dream in a world where Democrats and Republicans cannot agree on anything. It shows that people from disparate backgrounds can, when they try hard, reach a compromise that furthers the public good.

In the case of “1776,” the compromise was over whether slavery would continue in the new nation being formed. Despite the wishes of Adams, Franklin and Jefferson that slavery be phased out, Southern insistence on preserving their “peculiar institution” threatened to sink the new ship of state before it could be launched. The three founders saw that they could not stand on the principle that “all men are created equal,” but instead had to essentially “kick the can down the road” by maintaining the slavery status-quo in the interest of giving birth to a new nation. It was left to men of Abraham Lincoln’s generation to deal with the issue, four score and seven years later.

Watching “1776” each year provides some perspective on the turbulent political time we have been experiencing since 2001. It provides a reminder that statesmen (and women) who put the good of the country over partisan principle are the people who will be revered by later generations. Give it a watch this year. It’s usually on television around the 4th. Your Independence Day experience will be all the richer for it.