As we move past the half-century mark, it’s natural to be bit by the nostalgia bug. More and more of our sentences begin with, “Remember when …” and “Years ago …”

It occurred to me recently while at Yankee Stadium that baseball is the nostalgia sport. The lords of baseball go out of their way to try to make us remember that long-ago September when Bucky Dent shocked the Red Sox, or the October when Reggie hit three home runs in one game. In my family, we all remember the April opening day in 1996 when we sat in the cold, and watched Andy Pettitte pitch in a snowstorm. The team went on to win its first World Series in 18 years. 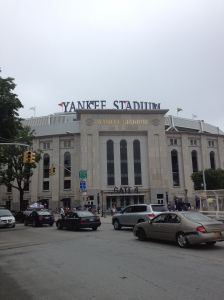 Because baseball is a sport that worships its past, it’s a great generational gap-bridge. It’s not unusual for three generations of a family to go to the ballpark together. During the Vietnam War, baseball was often the only way that many fathers and sons could have conversations that didn’t end with, “You’re an idiot!” Or “Get a haircut!”

Baseball kept the lines of communication open just long enough for mature and cooler heads to prevail. Back then, fathers could take their families to the ballpark, and the entire day would cost less than $100 – including hot dogs and beers. Today, two tickets will usually put you over $100. Add $12 beers and $7 hot dogs, and a trip to a major league ballpark has been converted from a regular pastime to a special occasion.

They spelled our name right.

My family recently planned one of those special occasions to Yankee Stadium. We had 22 people with us, so we qualified to buy tickets from group sales. That also qualified us to have our name on the scoreboard for a few seconds as the Yankees welcomed the Terranella family and friends. It was neat. In keeping with baseball’s mission of glorifying its past, Yankee Stadium features a full-blown museum in addition to Monument Park. This is like a mini hall of fame where plaques commemorate the legendary players of Yankee history. Grandfathers walk through, and point to Joe DiMaggio’s plaque and say, “I remember seeing him play in the 1949 World Series when they beat the Dodgers.”

Fathers point to Mickey Mantle’s plaque and say, “There was nobody better. Ever.” Sons look at Don Mattingly’s plaque and say wistfully, “If only he had played a few years later, he’d be in the Hall of Fame today.”

Now please don’t get me wrong. I know that women love baseball as much as men. My mother has been a fan for as long as I can remember. But I mention fathers and sons because I think that baseball is a key component of male bonding. But more than that, it fosters family bonding. Oh sure, there’s always one contrary family member who refuses on principle to root for the home team, but the ribbing that ensues is all in good fun. Baseball itself takes a lot of ribbing over being so slow. But I prefer to look at it as leisurely. Along with golf, it’s age-appropriate for those of us old enough to remember when there were only 16 teams, and pitchers batted in the American League. But it’s also age-appropriate for a five year old, who comes for the Cracker Jack and cotton candy. Come to think of it, I can’t think of a better way to spend a summer’s day.