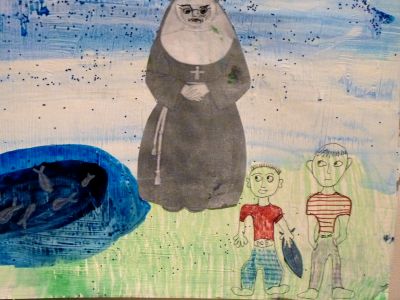 Late summer nights in the late ’60s would find me and my brother, Jim, crawling around in our friend’s backyard, groping for nightcrawlers. It wasn’t just for the fun of it – they were destined to be trout bait. Our favorite fishing hole was a pond bursting with rainbow trout about a mile from our house, buried in the woods behind a private Catholic girls’ school in Alpine, New Jersey.

We would sneak out of bed, get to the pond by 5:30 a.m., and start fishing in the dark. Once the first slice of dawn seared the horizon, the trout began to feed and the bite was on. Mr. Durkin, the resident groundskeeper, lived in a small house on the far side of the pond. If he saw us fishing, he would yell from across the pond, or jump in his truck, and drive over to chase us away. Either way, with Durkin, we always escaped. Maybe he meant it that way.

But the nuns were a different story. The school was run by strict nuns who wore traditional black habits with headpieces and tight white wimples – like facial spats – covering their cheeks and throats. They didn’t drive or yell or make any noise at all – they walked peacefully along the road, approaching in total silence. They were easy to miss. If you didn’t look up often enough to check the road, one of those holy zombies could sneak right up on you.

“Penguin at two o’clock,” Jimmy whispered urgently, reeling in his line so fast his worm periodically launched out of the water.

Sure enough, there was a nun, waddling slowly toward us on the dirt road that ran along the right side of the pond. Her hands were clasped under her belly, where an oversized wooden cross gently swayed and bounced with each measured stride. She was at least 75 yards away – an easy exit. I nervously reeled in my line, while Jimmy jammed the knife and other gear into the tackle box, snapping it shut.

“Move yer ass, here she comes!” he yelled, laughing nervously, and stumbling as he started to run. With a hooked nightcrawler dangling madly at the end of my pole, I grabbed the bait can and followed Jimmy, our feet thudding like gunshots on the rickety wooden dock.

The nun called out in her stern schoolteacher’s voice. “Stop you boys! Stop right there!” She had turned the corner of the pond, and was now only 20 yards away.

Why didn’t they ever run? Was it the clunky shoes? Or was running sinful somehow? Whatever the reason, we easily got away, whooping as we plunged down the steep dirt path into the woods on the far side of the road, our hearts hammering and rocks and dirt skittering around our ankles.

But not always. It was a glorious summer morning twenty minutes after dawn. A fat rainbow trout exploded to the surface and grabbed Jimmy’s bait, then darted away, tugging frantically as it knifed through the water in quicksilver flashes. It dove again, taking out line, then doubled back to leap in a graceful arc above the surface, scattering jeweled droplets as it shook its head from side to side, trying to throw the hook.

Within a half hour, we had two fat fish on the dock, and had lost four more to broken lines or thrown hooks. Rainbow trout are beautiful. Black freckly spots cover their back and fins, and a pink sorbet stripe runs in a festive banner from gills to tail. After they’re dead a while, the colors start to fade, and ours were looking that way now. The bite was slowing down anyway, so we decided it was time to go.

And there, at the end of the dock, stood a stern-faced nun.

“You aren’t supposed to fish here, you know,” she said, pursing her lips in disapproval. We’d been caught by the nun Gestapo!

“What are your names?” she commanded. We answered sheephishly; automatically.

She jerked her neck, peckish, and fixed us with a solemn squint.
“Lying is a grave sin.”

We shrugged. How could you prove your identity at age 14 – show your ninth grade report card?

“Now get out of here and don’t come back.” We started to gather our things. “And throw those fish back in the water.”

They’d been lying motionless on the dock for a half hour. Jimmy picked one up by the tail and cradled its head with his other hand, bobbing it in the water to move fluid over the gills as if to coax it to life. We both knew it was a hopeless gesture, but the nun needed to understand.

Like a startled turtle, she withdrew a bit back into her wimple, making the doughy skin squish further out around the edges. Her pale eyes were watery, but unwavering. She shook her head. We picked up both fish – dead, and still as stones. The pond looked opaque; a crystal carpet dancing in the brilliant sun. We gently slid them below the surface and they quickly disappeared into the cool blackness. They wouldn’t float until later when they started to rot. By the time they rose to the surface they would be ghastly caricatures of rainbow trout – white-eyed, bloated and frayed, with all their colors drained to gray.

We gathered our things and glumly trudged down the path into the half-shadows of the woods, heading home. We stopped briefly to dump out our leftover nightcrawlers among the weeds by the stream. Most would get eaten by birds before they could dig in. But at least they had a chance.

1 thought on “Gone Fishing. Caught by a Nun”