Boston, confessional, Fenway, Margo D. Beller, The Write Side of 50 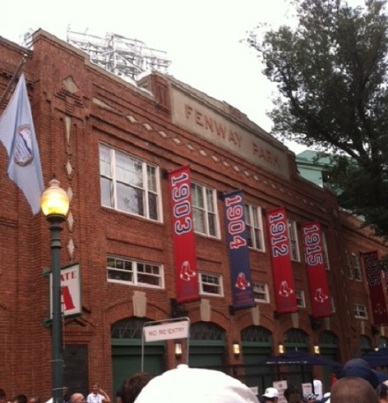 I went to college in Boston during the late 1970s. Thanks to the journalism school, and the various dormitories where I lived, I made a lot of good
friends I’ve managed to keep via phone, letter, and now e-mail over the past
three decades. I married one of them – MH.

Thanks to the proximity to Fenway Park, I became a Red Sox fan.
During my time in Boston, the Sox were in World Series contention twice,
but aside from the playoffs, and any series against the division rival New
York Yankees, it was always easy to show up at the ballpark on the day or
night of the game, go to the General Admission window. and buy a
bleacher ticket.

Although MH and I have periodically visited Boston and our friends
over the years, we had not been inside Fenway for 20 years. It
wasn’t for lack of trying. But Red Sox fans are fanatical, and except for one
recent bad year, Fenway and the Sox have enjoyed years of consecutive
sellouts. MH and I have had to keep up via radio, newspaper and the
occasional TV broadcast.

This year, I decided to try one of the online ticket services to combine a
visit with friends, and a visit to the ballpark. Perhaps the owner decided to
go to Martha’s Vineyard for the Labor Day weekend. I was able to get
seven seats together. The house was packed, the Red Sox won and my
friends and their spouses – all more fanatical about the Sox than when we
were in college, thanks to that 2004 World Series win – were very happy.

The next day we had a cookout at the house of one friend. Baseball came up, yes, but so did music, old friends in other parts of the country and the
economy. If the economy is improving, why are there no full-time jobs with
benefits, particularly for those of us who’ve been out there working for 20
years or more? Why were over 100 people cut from one friend’s
employer, their jobs sent to India? Why has another’s cut its contributions
to the 401(k)?

Why do we feel less secure as we get older after growing up hearing from
our first-generation American parents that they were working hard to make
it easier for their kids to get ahead?

None of us had answers, although we all had theories. But as depressing
as the discussion got at times, I was strangely comforted that these
friends have the same fears and concerns. It is a conversation we could
only have face to face.

That is what those who rely solely on Facebook and other services for
“friends” don’t seem to understand – real friends are people you eat with,
share fears with, see your favorite baseball team win with, and laugh with.
Face to face. My old friends have newer “friends” via Facebook, but they
know the difference.

It must be the reason they put up with me.