Art, Frank Terranella, The Write Side of 50

I think that one of the aims of this blog should be to point out things that we over-50s are likely to enjoy. Along those lines, Billy Crystal has written a book that I think perfectly captures what life is like after 50. It’s called, “Still Foolin’ ‘Em: Where I’ve Been, Where I’m Going, and Where the Hell Are My Keys?” I recommend it to everyone who, in Crystal’s words, “can still do everything they did at age 30 if only they could remember what those things are.” 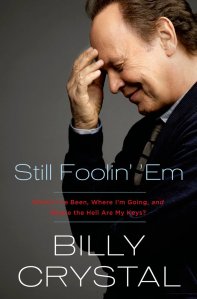 If you consider aging Baby Boomers to all be occupants of the same classroom of life, then Billy Crystal is our class clown. He has been the voice of our generation through his memorable years on Saturday Night Live to his classic movies like “City Slickers,” “When Harry Met Sally,” and “Forget Paris,” to his brilliant stints as host of the Academy Awards. Now at age 65, he is the prototypical Baby Boomer – having grown up in the New York suburbs watching Officer Joe Bolton on Channel 11.

Like the writers in this blog, Crystal pulls no punches when discussing the effects of aging. He tells us, “During the past year, things started to grow on me where they shouldn’t. My ass looks like the bottom of a boat.” He says that he still is interested in looking at 20-something women, but now they’re out of focus and, “by the time I get my glasses on, they’re gone.” He laments that these days when he says, “dinner’s on me” he means it literally. He notes that age has made him feel cold most of the time, and he’s starting to think that global warming isn’t such a bad thing.

Billy spends an entire hilarious chapter on senior sex (you’ll have to read the book for details). I’ll just say that he is as candid about this aspect of life after 50 as any other. He also spends some time talking about the after-50 problem of staying awake at the movies or at Broadway shows. Ultimately, I found myself nodding my head in agreement while listening to the audio book. By the way, if you’re into audio books, that is the best way to experience this work because Billy reads it himself and the entire book is like a long stand-up comedy show.

I think the most surprising thing about this book is how well-written it is. It is not hyperbole to compare the writing style with Mark Twain’s. It’s that good. Billy’s line that, “I sleep like a baby. I’m up every two hours,” could have come from the pen of Twain. But ultimately, what makes the book so attractive to the over-50 audience is its sincerity and truth. When Billy talks about his insomnia, it’s something that most of us can relate to. And that’s the key to good humor writing.

For example, Crystal spends a chapter on what he worries about these days. Among many other things, he says, “I worry that someday my kids will look down on me and say: “‘I changed him last time. Now it’s your turn.’”

The truth can sometimes make you wince, but the trick is to always stay positive. We can draw inspiration from one of Billy Crystal’s famous characters. No matter the effects of aging – “You look wonderful!”