Bay Leaves, Food, Lois DeSocio, The Write Side of 50 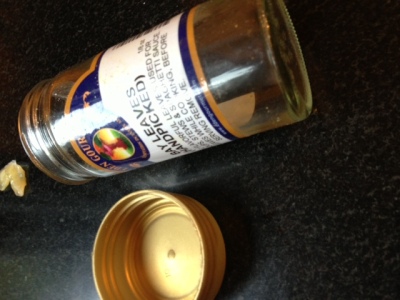 Recently, I decided to mom-up and make something nostalgic and yummy for my two sons, who were both expected over for dinner. Bon Appetit’s Chicken Spaghetti from a 1990-something, free little recipe book, was their very, very, most-favorite, spicy, noodley meal since .. forever.

But what evolved into a mini-mishap wasn’t that neither one of them remembered that Chicken Spaghetti was their very, very, most-favorite, spicy, noodley meal since forever. It was that I was out of ingredient number nine – one bay leaf. While part of the fun of cooking for me is putting my own twisted spin and spice on recipes – I tweak and jiggle them as a rule (pretzels for bread crumbs, potatoes for flour, sherry for chicken broth), I’ve never messed with a bay leaf.

Even though there is no discernible flavor, that it hurts to bite it, and all recipes demand that it be removed before serving (I have secretly pummeled a bunch of them and tried to pass them off as oregano, only to spit them out throughout the meal), I figure its inclusion in so many recipes means that it must offer something so subtle, so mysterious, so necessary! that I, as a human, wouldn’t know what the recipe was missing until a bay leaf was missing.

The other ingredients in the recipe must somehow play off the fragrant and floating bay leaf, in a way that is transcendental, mystical, and divine – like God. (There is no substitute.) And to leave out the one bay leaf from Chicken Spaghetti felt shiftless. Indolent. And far, far worse than if I leave out the chicken. Or the spaghetti.

But I took an about-face that night. I didn’t want to run out to the store just because I ran out of bay leaves, as I’ve done in the past. After all, if they are so subtle, why doesn’t its cryptic force amp-up if I throw in seven – or ten? Yes, they smell good, but the smell is immediately usurped by the other stuff in the pot – like tomatoes, meat – lemon! Own up, bay leaf. What’s your point? And why do I need you?

You don’t sweeten, spice or thicken. Are you just a team player? Do you bring out the best in a sprig of thyme? Or a sage leaf? You are a “classic” in a bouquet garni, alongside other fragrant and flavorful herbs, and, I’m guessing, it’s because they are tied and netted to you, that they must also be tossed from the finished sauce.

So in the spirit of being a middle-aged free-to-be, I had decided that night to no longer buckle to the bay leaf. That night, I substituted it with mounds of frozen kale, of which I had pounds stored for weeks in my freezer. I’ve learned that kale can be cooked to death, and those mounds all ultimately boiled down to the size of about three stacked bay leaves. And you can eat it.

So even though my kids had no memory of the Chicken Spaghetti of the past. There were no complaints about no bay leaf.