Bob Smith, confessional, Halloween, Men, The Write Side of 50 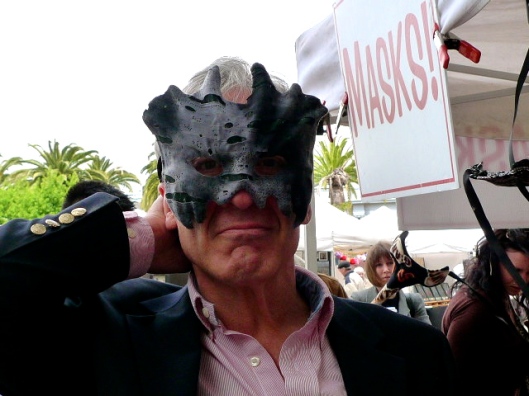 My favorite Halloween costume, ever, was when I was eight or nine years old. I had somehow conned my mom into buying me a full-face mask of Nikita Khruschev, the famous Russian leader, who was a terrifying figure during the Cold War and Cuban Missile Crisis.

The mask was surprisingly lifelike, complete with a prominent gnarly wart on the left cheek and a fake black Russian winter hat curving over the top. I wore one of dad’s gray wool overcoats, which mom pinned up so it didn’t drag on the ground, and I wrapped a scarf around my neck to hide my t-shirt underneath. Black winter boots rounded out the ensemble.

Fully dressed, I was a perfect miniature version of Khruschev – sort of an early sixties “Mini-Me.”

The best part of the costume was that no one could tell who I was once I had it on, so I would stomp around saying threatening things like, “Death to America,” and “Capitalist pigs!” in a gruff Russian accent, while occasionally slamming a shoe onto a table. (Mom shut that part of the routine down pretty quickly – shoes, deemed inherently dirty, were not allowed to touch any table where we ate our food.)

I got big laughs at every house we stopped at – the unsuspecting housewife doling out candy to the crowd of kids would come around to me and giggle.

“Who do we have here – oh look, it’s Nikita Khruschev! Isn’t that cute!”

To which I would reply, in character, in my best rumbling Russian accent, “Trick or treat. Ve vill bury you!”

Nikita and I were both partial to Reese’s Peanut Butter Cups, Milky Ways, and Milk Duds. Anything homemade or healthful, such as apples or popcorn balls, were promptly discarded in the gutter. Stupid capitalist pigs.