Bob Smith, confessional, Men, The Write Side of 50 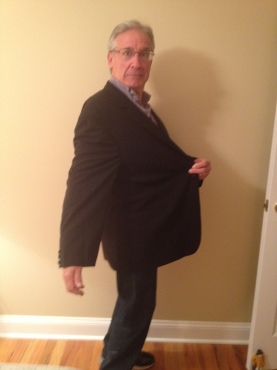 My oldest son is getting married tomorrow. I am expected to wear a tuxedo. He and his fiancée are meticulous planners, so they told me months ago the name of the rental store where they were getting tuxedos for the bridal party. But I didn’t bother taking the name, because I assured them I had my own tuxedo.

In fact, I have three. Over the course of my 30-year career as a lawyer, I had to attend, each year, at least one or two formal events. After a couple of years of renting tuxedos (at $100 or more per rental), I realized that, in the long run, buying a tuxedo would be far cheaper. A decent tuxedo, after all, costs only between $300 and $500. It would pay for itself in a couple of years.

But you only realize the cost savings if you stay the same size, and can wear that tuxedo multiple times. I almost didn’t.
When I bought my first tuxedo I weighed close to 230 pounds, which for me (at barely 5’7″ tall) was gigantic. Because the pants came with a 40-inch waist, the jacket was made for a much taller, generally bigger man. Except for all the accumulated fat around my chest and midsection, I wasn’t that man.

So the tailor shortened the jacket, but left all the extra fabric around the middle, so it wouldn’t bind uncomfortably on my unseemly girth when I buttoned it up. I think that tuxedo cost $300, and I wore it for a couple of years – I got my money’s worth.

Then I decided to get healthy and lost 25 pounds. When the next formal dinner rolled around, the tuxedo in my closet was clearly too big. I was determined not to ever let myself get so fat that I would need that big tuxedo again, but I didn’t want the tailor to alter it, either. No – I wanted to keep the big tuxedo around to remind myself how bad things actually could be if I wasn’t careful. The second tuxedo, a size or two smaller than the first, again cost me $300 or $400. I wore that one for four or five years, maybe eight or nine times – an effective rental rate of about $40 per occasion. Not bad.

Time went by, and my attention to my health and weight slackened to the point where I weighed more than 220, and had to put on the jumbo tuxedo again. I was getting more mileage from the $300, but I was miserable. I decided to lose weight again.
This time, I went all the way – by the time I was through, I had lost nearly 50 pounds. But weighing in at 170, neither tuxedo would fit, and the difference in my size was too great for either one to be altered. I bought another.

The third tuxedo, like the others, cost $300 – $400. It’s a size 34 waist, and has a corresponding low 40’s size jacket. I wore that tuxedo to at least a half dozen events before my recent retirement from the law, so it too has paid for itself.

When my son’s wedding was a few weeks away, I went to the closet and pulled out all three sizes of tuxedo: the fit-Bob, the fat-Bob, and the I-can’t-believe-I-was-ever-that-fat Bob. As expected, the largest fit like a suit made for a circus clown. Even the intermediate size swam on me, as if I were wearing my older brother’s hand-me-down. I might get away with wearing that to the high school prom, but it won’t do for my son’s wedding.

I’m happy to say that the jacket for the fit-Bob tuxedo is still the perfect size. But the slacks, on the other hand, were a tad snug around the waist. Apparently, fit Bob is slipping a bit. So I finally gave in and took it to the tailor to let the waist out a couple of inches, which will make the pants fit comfortably.

When the wedding is over I’ll park it in the closet with my other two penguin suits to await the next formal occasion. Now that I’m retired, I don’t expect that many. But fit, fat, or far too fat, I’ll be ready.