Bob Smith, Father of the groom, Men, The Write Side of 50 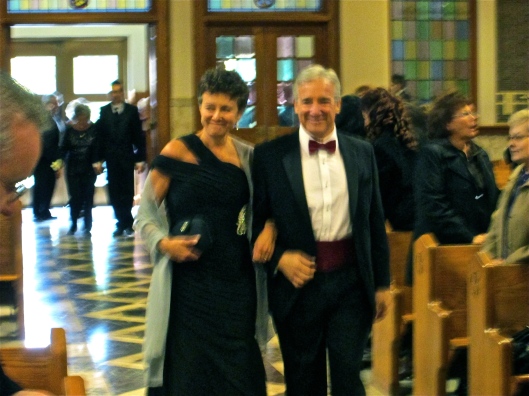 At my son’s wedding this past Saturday, I learned that very little is expected of the father of the groom. At least briefly, the father of the bride is a star – walking his daughter down the aisle, and wistfully handing her over to her new husband-to-be. It’s a touching moment – closely watched by the gathered churchgoers, hankies in hand.

By then the groom is already waiting at the altar – hopefully, thanks to the best man, sober enough to avoid claims of duress or insanity. But the father of the groom is merely a front-row spectator wearing a tuxedo. Aside from discreetly dabbing away tears as the ceremony progresses, he doesn’t have to do anything.

The best man handles the rings. The maid of honor, like a fastidious footman, rearranges the bride’s train every time she moves. Inspirational readings during the ceremony are recited by a sibling, friend or favorite uncle. And, of course, the main speaking parts are reserved for the happy couple and the priest. There’s usually a receiving line, either as the guests leave the church, or as they arrive at the reception hall, to give the parents of the bride (who traditionally pay for the reception) the opportunity to personally thank each guest for stepping up with a respectable cash gift.

But my son and new daughter-in-law eschewed the traditional wedding format, so there was no receiving line at all. After the ceremony, and a few formal pictures on the altar with the newlyweds, I simply wiped my cheeks and got onto the “party bus” that took us to the hotel where the reception would be held. My only role on the party bus was to drink champagne with my wife, my new in-laws, and the humongous (six men and 10 women) bridal party. That was easy. But it was also only 3:30 p.m., and the reception was at 7, so my next challenge was staying awake after four glasses of party-bus bubbly.

Maria happily chatted with relatives and other guests in the hotel lobby as I fought to keep my chin off my chest. After a number of close calls with napper’s whiplash, I gave in, and went up to our room to nap. Forty five minutes later, I was a new (if slightly groggy) man, ready for the rigors of the cocktail hour and reception.

The cocktail hour was a blur of steamed dumplings, marinated vegetables, skewered fried things, and cheese enough to choke a cardiologist. Nothing to do there but gulp wine, greet and eat. At the reception itself, the father of the bride has another hankie-moment when he dances with his newly-married daughter. Then the mother of the groom does a similar sentimental turn when she dances with her son, accompanied by wistful sighs and sniffles from the audience. Again, the father of the groom merely watches, ready with a tissue and a warm absorbent shoulder for his wife to lean on when the dance with son is done. The rest of the night you spend enjoying the food, the music, the dancing, and the company of family and friends. No heavy lifting; no public displays of emotion.

We stayed in the reception hall, hugging last guests goodbye, until they turned up all the lights. Waxy-smelling smoke-trails rose from the centerpiece candles as the busboys snuffed them out. The staff banged the round wooden tables onto their sides, snapped the metal legs flat against the bottoms, and rolled them away. Two pairs of women’s shoes, discarded during a dance frenzy, stood by the door awaiting their owners’ sheepish return.

Although our son has been out of our house for years, there’s something transformative about the formality, and apparent finality, of the marriage ceremony. I have every hope, and no doubt, that his marriage will last. But regardless of what happens, I feel as if a bridge has been crossed, and there’s no going back.

Maria and I walked quietly back to our room. We were happy. But our bellies were full, our feet hurt, and we were looking forward to getting some sleep. Here, with her, my role was comfortable and clear. The day was ending where the whole process had begun over thirty years ago: with the two of us walking hand in hand, hopeful for the future.

3 thoughts on “Father of the Groom, and All That Doesn’t Come With It”