Caveman diet, Food, Lois DeSocio, The Write Side of 50 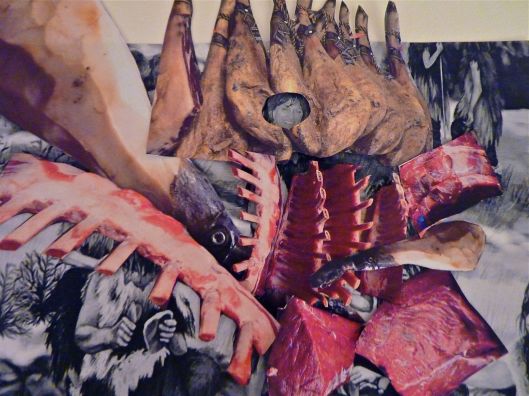 I am woman. Give me meat.

This girly-girl has recently gone Paleolithic. It started at a recent birthday dinner. It was at a steakhouse. As a lover of everything about a steakhouse (the dark wood, the long bar, the abundance of men) except steak, I’ve always been the odd woman out by ordering fish or pasta.

“Because you only order steak at a steakhouse,” has been the retort to my comments on the badly turned-out fish, or the limp and over-laden pasta that is usually standard fare at a steakhouse.

So that night, for the first time (I believe ever), I caved in, and proclaimed from my new “What-the-hey-I’m-59,” mountaintop:

“I’ll have the Blackened Rib Eye!” (Smothered in onions, mushrooms, and a Jack Daniels demi-glaze.)

It was good – good enough. But what struck me that night, and has stuck with me a month later, is what didn’t stick with me that night – the puffy, sloth-like aftermath of my usual order of a loaf of bread with a bowl of pasta, or anything with a glob of melted cheese on top.

I ate half the steak, and all of the accompanying broccoli. I got full fast, and stayed that way until the next day. (No late night, pasta-leftover, round-two in front of the TV.)

So now I’m on a roll. I recently took the load of leftover sausage that was in my freezer from Christmas, put on Dean Martin (whose voice makes me cave), and hacked and clawed the casing from the sausage, pummeled and pounded it into a circle, mushed it together with the foraged-for-and-handpicked-from-the-local-market (which I walked to) cremini mushrooms – and baked it with an egg on top. The recipe is in line with the revival of the Paleo, or Caveman, diet).

And since it’s pretty much a done deal that we all have a ” … little bit of Neanderthal in us …“, I see nothing amiss about replacing my oatmeal, or leftover-quinoa breakfast, with a big turkey drumstick.

So my life-long sidestep around meat may have taken a turn. In spite of descending from a family that loves liver, I’ve never craved a mutton chop like I do a potato chip. I’ve never said, “Yum,” at the sight of a blood-red Porterhouse. Meat is not crunchy enough for me, nor as consoling as a carbohydrate. But now, I’ve learned that the beauty of meat lies in its ability to satiate with just a small portion.

I now feel leaner than ever. I’ve trimmed most of the fat that had inched-up and stuck to my middle after the Christmas carbo-overload.

And, to be honest, a T-Bone is actually more in sync with the primitive, inner me; that cave-man girl. The one who doesn’t crave a knight in shining armor, but whose appetite has always been whetted by a hulk of a man who grunts just to her, and drags her off into his man cave to share his meat.