Concepts, Frank Terranella, Men, The Write Side of 50

You are just a few hours old as I write this. You surprised us by arriving three weeks early, but that’s just like your father. He came early too. I guess you were anxious to explore the world that you could only hear for months from the dark place where you were.

Well, as you will see, it’s a mixed bag of a world. On the one hand, you have been born into a nation full of guns, drugs and greed. But on the other hand, your nation is full of very good people, who fight every day to solve its problems. Perhaps by the time you reach my age, in 2075, the good people will have succeeded in righting some of the wrongs. 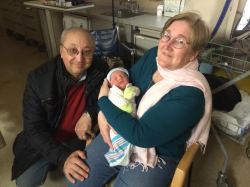 But some things will probably not change. For all of its history, mankind has had an affinity for war. I think it’s inbred in the species. I just hope that your generation can avoid the nuclear war that has been the world’s greatest fear since I was your age. I also fear that prejudice will remain with us. I know that your parents will teach you to treat everyone with respect, no matter what they look like. So I know you will never hate anyone just because they are different from you.

I hope that you live long enough to see grandchildren and great grandchildren. The joy of new life is so invigorating. I hope that just before you turn 87, you remember me as you raise a glass to toast the year 2100. I can’t imagine what the world will be like then, but I’m fairly sure that everything I write now will still exist in some database then. It’s a tiny bit of immortality for all writers like me.

I hope that we will have solved the global warming problem by then. Perhaps we will have abandoned fossil fuels, and harnessed solar or wind power, and made it practical.

Perhaps you will have computers implanted into your brains. I hope that cancer will be extinct as you enter the 22nd century.

With lots of love (and tears in my eyes),

3 thoughts on “My Letter to You, My Grandson, On the Day You Were Born”