Anthony Buccino, confessional, Men, The Write Side of 50 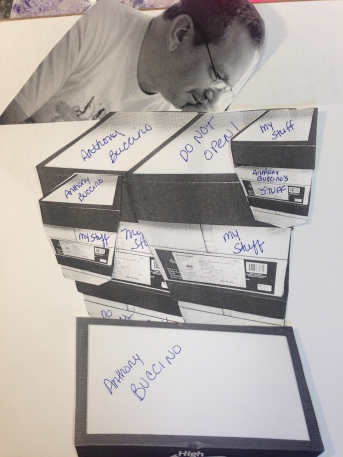 Whatever happened to George Carlin’s stuff?

Actually, I don’t care what happened to the entertainer’s stuff. His stuff was crap. My crap is stuff. He would say so himself, except he’s gone, and as an atheist, probably not far. But as for me I’ve been thinking about my stuff as I sit here in my man cave/bunker/warehouse with about 60 of those white storage boxes full of my stuff.

I’m not a pack rat. I’ve been writing for more than 40 years, and I don’t have any notes from before 1971, more or less. So, I’ve got a lot of notes about stuff I wrote about, and probably a lot more notes about stuff I wanted to write about but haven’t done so yet. And boxes of books that I used in my research. And more boxes of books I intend to read when I get some time. I can’t bear to part with any of them.

Some of these boxes I had taken down from the attic where there are just as many boxes as the beams will hold. I was looking for something, and I probably found it, but haven’t gotten around to bringing the boxes back up, yet.

While the boxes were handy, I went through them and discarded all the junk. That eliminated almost two boxes. I filled those two boxes with accumulated knick-knacks, opened playing cards, souvenirs and such, Mom’s swizzle stick collection and such, then labeled them so they are ready to go up to the attic.

I compare these sagging white boxes surrounding me to the various hard drives hooked up, and others standing by my computer. It’s probably a close comparison as to which hold more data. But that’s not what got me thinking about my stuff. A power surge or a burst water pipe would certainly have me moaning for all the lost treasures in my stuff. But, no, that’s not it either.

It’s all about what happens to my stuff when I’m not here anymore to take care of it, to sift through it – looking in just the right box for the right piece of paper, or photo, or book, that I need to somehow complete my thought. With the computer I can put in a word or phrase, and I get rows and rows of documents where that word or phrase appears. With these white boxes and the ones cooling in the attic, the sorting algorithm is in my ever-shrinking pack of grey matter.

When I’m gone, what will become of my stuff? Will my surviving relatives declare my stuff as crap, and send it off to the Happy Hill Recycling Farm? Already, I know someone in whom this collection cluttering the basement incites a near grand mal seizure at the mere thought of dumping all this stuff without my aging muscles to bag, lug and tote to the curb.

The books, in several trips, would go to the local library’s annual used book sale, and those not sold to be refreshed into new books some day. My notes and scraps of ideas? Oh, where will they go without me? I suppose the truth is that if there is no extant published version of what I may have produced from my stuff, online or in print somewhere, the thoughts and background stuff will be surely tossed.