Alabama, Frank Terranella, Men, Monroeville, The Write Side of 50, Travel 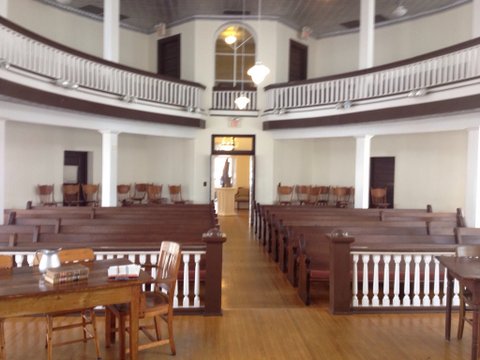 The courthouse in Monroeville, Alabama, which was recreated in “To Kill a Mockingbird.”

There are a lot of lawyer stories on television, and in movies. Most of them are not very flattering. I think of TV shows like “L.A. Law” and “The Good Wife.” Lawyers are often called upon to do the most unpleasant things for us. They sometimes have to act like monsters, so we don’t have to. It’s no wonder the public has such a poor perception of lawyers. And yet, the practice of law can be an honorable, even a noble, profession.

Exhibit A is a Southern lawyer with the unlikely name of Atticus Finch, the protagonist of Harper Lee’s book, “To Kill a Mockingbird.” Now, there is no nobler lawyer in American literature than Atticus Finch. His demeanor, intelligence and ethical values are what many lawyers aspire to, but seldom match.

Atticus doesn’t want his children to have guns and doesn’t have a gun in his house, but when a rabid dog needs to be put down, the police chief calls on “deadeye” Atticus to make the shot. He accepts payment from poor farmers in produce. He is known far and wide as a fair man. That reputation gets him appointed counsel for a client that no one else would represent – a poor black man in Depression-era Alabama, who is accused of raping a white girl.

If you’ve seen the marvelous 1962 movie starring Gregory Peck, no further explanation of the story is needed. If you haven’t, I envy you the thrill of meeting Atticus Finch for the first time.

A few years ago, my wife and I were touring the Southeast as part of our decade-long plan to visit every state in the nation. We learned that the courthouse in Monroeville, Alabama was the one that was recreated in Hollywood for the movie. That’s because Monroeville is the home, to this day, of Harper Lee. She grew up just a couple of blocks away.

As we headed South on I-65 from Montgomery on our way to New Orleans, we took a slight detour to visit the old Monroe County Courthouse. It’s now a museum, full of items that lawyers of Atticus Finch’s time would have used. The museum is nice, but the star attraction is the old courtroom itself. It looks exactly like the movie, since Henry Bumstead, the art director on the film, came there, and took pictures, and made drawings, so that he could reproduce it in Hollywood.

As you walk into the courtroom, you can just imagine yourself in a scene from the movie. Fortunately, it is possible to climb the stairs up to the balcony, where the less prominent citizens, including children, could watch the proceedings.

In the story, Jem and Scout (children of Atticus), and their friend Dill (who Harper Lee based on her childhood friend Truman Capote), sit on the floor of the balcony, dangling their legs through the wooden supports that make up the balcony railing. The accused’s family sits nearby, along with their minister.

My wife and I were able to sit and get a Scout’s-eye view of the courtroom. It was a surprisingly moving experience.

But that’s the power of good storytelling.

And they do more than just have the setting for “To Kill a Mockingbird” in Monroeville. Every summer, they actually populate the courthouse with actors, and put on a play-version of the story. The audience gets to sit in the spectator portion of the courtroom, while the actors stage the trial. It’s the hottest ticket in Alabama.

In the story, Atticus puts on a splendid defense for his client, Tom Robinson, after which, with head held high, he packs up his briefcase and heads for the door. Tom Robinson’s family waits for Atticus to gather his things and stands in silence while he walks to the exit. In a show of the depth of the respect for Atticus in the community, the minister prods the Finch children to, “Stand up. Your father’s passing.”

Can you imagine a lawyer today being that beloved?