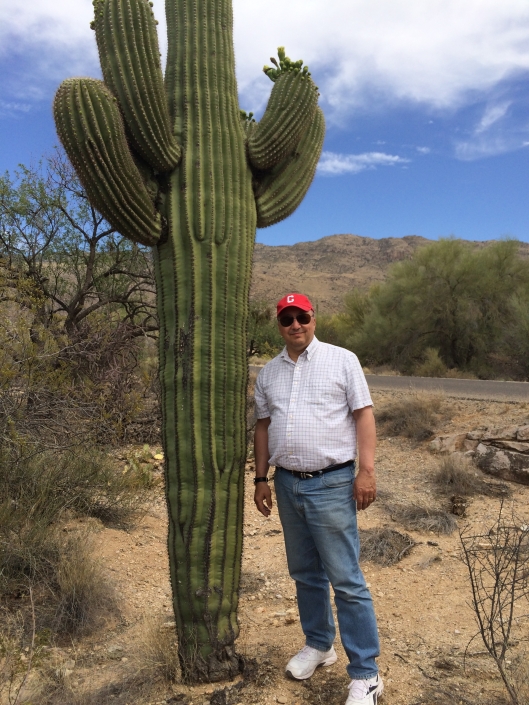 Several years ago, I saw a cartoon showing a man at the gates of hell. Satan is there in all his horned glory sitting behind a desk and before him is a man who has obviously just arrived. Sweat is pouring off the man’s brow as he wipes his brow with a concerned look on his face. Satan is speaking to the man. The cartoon’s caption reads: “Yes, but it’s a dry heat.”

On my recent trip to the Southwest desert I was able to experience this dry heat for three full weeks. And after all that time, I have to say that there’s something to this retort by residents of Arizona, Nevada and New Mexico when asked how they can stand triple digit temperatures for weeks at a time.

Of course, traveling in April and May, I did not get to experience 100-degree days. The hottest it got in Phoenix while I was there was 98, but a few degrees don’t matter too much when you’re baking in an oven. So what’s the difference between 98 degrees in Phoenix and 98 degrees in New York?

You can breathe in Phoenix. It’s as simple as that. Breathing on a hot August night in New York is like drinking a thick shake through a narrow straw. It takes effort. Breathing hot air in Arizona takes no effort at all.

The other advantage of low humidity is the fact that shade brings instant relief from the heat. I didn’t bring a thermometer too measure it, but I swear it felt like a 20-degree difference. The low humidity also means that due to radiational cooling, the temperature drops like rock as soon as the sun goes down. Our days began in the 50s and rapidly increased, but the mornings were always delightful. Likewise, the evenings were comfortable enough to sit outside and dine al fresco.

Having said all this, it is a fact that modern life would be unimaginable in Phoenix without air conditioning. The afternoon heat seems intense enough to bake bread. Air conditioning is not a convenience; it’s life support. The evidence of this is that in 1950, only 107,000 hardy souls lived in Phoenix. Once air conditioning became practical, the people came. By 1960 there were 440,000. As of 2012, there were 1.5 million.

So if you want to wake up every day to sunshine, Phoenix is the place.

And in fact, thousands of Americans retire to Arizona every year. The famous retirement village Sun City is just outside Phoenix. Everywhere we went we met former New Yorkers who had retired to Arizona. I don’t think I would want to go that far, but if I could swing it, I certainly would love to spend my retirement winters there. Sure it’s hot, but it’s a dry heat!