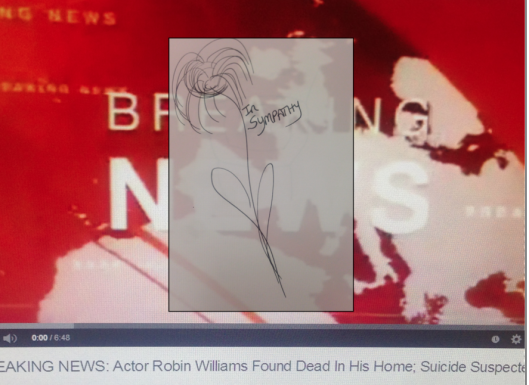 Last night we were on the couch watching TV. Alex Trebek had just announced the close of the initial Jeopardy round, when the network news logo suddenly flashed across the screen, accompanied by blasts of militaristic brass music and marching drums, and the words “SPECIAL REPORT” in red capital letters:

“We interrupt our regularly scheduled programming to bring you this Special Report from ABC News,” said the announcer, as my heart upticked in anticipation.

Has one of the local wars around the world blossomed into a nuclear holocaust?

Has an assassin’s bullet found the president?

Is a major U.S. city a smoldering ruin thanks to a terrorist attack?

Involuntarily, my mind reeled back to that November afternoon more than 50 years ago, when TV brought us the stunning news that President Kennedy had been shot dead in Dallas. What new calamity could this be?

None of the above – a celebrity had died.

The announcer, a square-jawed 20-something guy in a somber suit and serious demeanor, stared reassuringly into the camera. His hair was piled high on his head – dense, yet richly textured – like a freshly-baked chocolate souffle.

“ABC News has learned that Robin Williams is dead,” he said. “The gifted comedian and actor, 63, was found at his Northern California home earlier today. He appears to have died of asphyxia but authorities have not confirmed that, or any further details on the circumstances of his death at this time.”

He went on to note Williams’s brilliant comic talent, his long and varied TV and movie career, and the fact that he had long struggled with drug and alcohol addictions and severe depression. The report concluded after two minutes with the announcer promising “further details as this shocking and saddening story unfolds.”

Look, I loved and admired Robin Williams as much as the next guy. It seems anyone with a glimmering of talent today is called a genius, but he was the real thing – a comic tsunami, a dead-on, rapid-fire impressionist with both precision timing, and wickedly hilarious things to say. Loved him.

But have we really become so frivolous as a society that the death of a comic actor – even a transcendently talented one like Robin Williams – is considered breaking news that merits stop-the-world treatment? Has Entertainment Tonight hijacked the news?

No disrespect to Robin, but except for his immediate family and friends, I don’t think any of us will recount, decades from now, exactly where we were and what we were doing when we learned of his passing.

We interrupt this blog to bring you a special report: Mrs. O’Toole’s cat is up a tree again. The fire department is on the scene with a ladder truck trying to effect the rescue. Now back to our regularly scheduled (escapist) programming.