Julie Seyler, The Write Side of 50 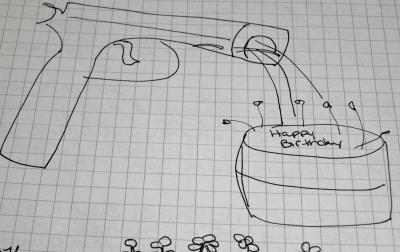 On October 7, 2012, The New York Times ran an article discussing how 3-D printer technology is allowing us to make guns at home.  This flipped me out, because really, regardless of where one stands on the Second Amendment (the right of the people to keep and bear arms), and gun ownership laws, it does seem somewhat crazy that we are moving into an era where guns, like cakes, can be whipped up at home with a little push of the button. Talk about the Wild Wild West!

So I brought the article up with a couple of my colleagues at work – neither of whom were particularly bothered.  One guy said, “If a person is intent on killing, it is very difficult to stop them.  They will find a means to do so with whatever technology is available at the time.” And another guy said that you still need to understand how to assemble the gun, so we need not worry about our ten year olds readily printing a gun for a fun game of cops and robbers.

But what does it say about where we are going as a society?  The simple fact that homemade guns are coming to your local neighborhood – it just blew my mind.  I wrote the above, did a fast drawing that reflected how I saw the situation, and figured one day we’d post my thoughts on the blog.  But last Friday I was talking to a different colleague, and he said, “Do you know what one of the most watched YouTube videos is?” I wouldn’t know since I forget YouTube exists. He said there is a video online that directs you how to make a paper gun – a usable, workable device to kill someone, and it is one of the most popular, watchable, and shareable videos within the small domain of YouTube entertainment.

He shook his head in utter disgust and resignation, and then asked me if I had heard of the University of Colorado dormitory that is specially designated for college students. You know – 18-21 year olds. That own guns. (Hate to be there on a night of too much drinking.)

Wherever you look, the liberalization of gun laws, coupled with the constant progression of technology, is not making us safer. It is just making our society scarier. I grew up knowing a gun was a company-manufactured device sold through regulated retail outlets. There were laws that governed accessibility. I may not have been any “safer” than I am today, but it sure felt that way.

So how does this relate to being on the right side of 50?  Only that I have more years behind me to feel sad about the years ahead.