Birthday, Julie Seyler, The Write Side of 50 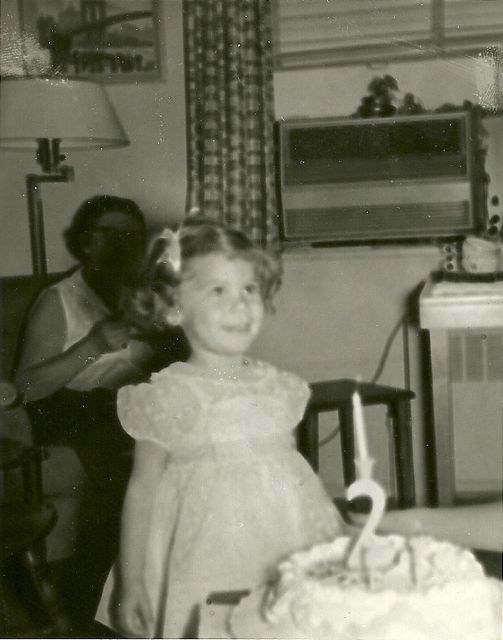 Birthdays are funny. How we relate to the day we are born changes with age. The year we turn one we are incognizant of the significance, but parents and grandparents are feasting on the fact that a year has passed since you entered the world. By the time you are six, birthdays have been converted into knowledge that this is a special day. Presents are bestowed and there is cake galore. Anticipation builds for the next year, which feels as if it will take FOREVER. Gaining age is a positive.

The milestone birthdays set in: 18 and the right to vote, 21 and the right to drink (albeit in 1973 the legal age in New Jersey was 18), 30 and the idea that this is “old,” and 40 brings the recognition that this is “young.” The big 5-0 feels momentous, but with time passage, it dawns that this is still the minor leagues. After 55 things seem to change slightly, because it is this new era of approaching “old” age, and yet it is always relative. Young and old are only comparison adjectives.

Today, I turn 59. Amongst my peers born in 1955, I am on the “younger” side. I have friends that will be turning 60 in four months. It is beyond comprehension that this is happening. I remember my “Sweet 16” (it was a surprise party), and I planned my 40th with assiduous care.

Nineteen years ago, and it seems like yesterday. But the reality exists: I shall soon be a woman of 60 years of age.

The cliche that time collapses as we age is proven as each year flies by. Twenty years is forever at six, and the blink of an eye at 60.

But I am going in with gusto, because while I may wither on the outside I am determined to take my Vitamin D and blossom on the inside.

With age comes wisdom, and knowing that the best and only defense to the right side of any age is staying active, curious, connected and laughing as much as possible.

Birthday, confessional, Lois DeSocio, The Write Side of 50, Wrinkles 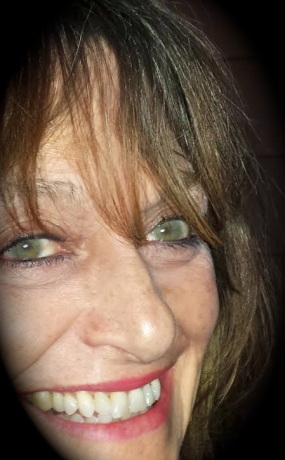 This year, I’ve decided to blow up the face part of a photo a friend took of me this past New Year’s Eve, one half at a time, and post them both for all to see. So, way at the bottom of this post (and smaller, and awash in sepia tones), is the other half of the picture on the right. The wrinkled, droopy-eyed, and crooked-toothed half. I would never have done this on my 58th birthday.

I take great pains to make sure a bad picture of me never circulates past the delete button on a camera. I have always hated having my picture taken (“No look!” I would yell when I was two. “Don’t put me on Facebook!” I yell today), but I traditionally make sure I do something singular for myself on my birthday. So my gift to me this year is to get over it, already. Face it. Of course I have wrinkles. I’m practically 60.

Those of you who know me well are most likely aghast at my courage. This cannot be understated. I can be vain, and prefer to keep my fading face off the grid, and out of my mind. Obviously, it’s a sham that I’m as ageless as I am in my mind’s eye – walking around with an eternal youthful glow that doesn’t even need candlelight. But what’s the use of an imagination if not to blur lines?

But I’m also right-minded. And while a picture never lies, a picture is also all about the angle. So, for my birthday, I’m pointing my point of view on aging and all that it can do to a face as a good photographer does with a camera – towards the truth in the shot; the subtleties that underlie what is in plain sight. My truth in the shot below being: those extra-long facial fissures illustrate a lifetime of smiling. And, I’m practically 60.

In a recent article by Gina Kolata in The New York Times on a study of aging skin was this quote from scientist, Dr. Adele C. Green:

“After 55, aging’s effects on skin start to predominate.”

Translation: Unless you fill it, freeze it, or lift and tug your cheeks to the back of your head, your skin is going to pucker, furrow, fold and groove all the way to the grave.

So, at least for today, and until I have a chance to check out Retin-A, I will share my (yes, sepia-ed, but otherwise untouched) bad shot. It’s written all over my face – I’m practically 60.

I turned 58 today in Yogyakarta, Java. According to my trip itinerary we shall be flying at 7:55 a.m. back to Bali, where we travel to Pemuteran in the far north of the island for a couple of days of snorkeling. We may see a waterfall, and a temple or two, along the way, and hopefully will stop at a market to go souvenir shopping – one of my favorite things to do. I am a complete tourist, and adore shopping for tchotchkes that I would not see back at home. (Although these days we live in such a global world, everything seems to be available online.)

So my birthday is a travel day, and that’s fine. I will be doing something that I don’t usually do on my birthday – like driving in Indonesia. And will definitely do something I always do – celebrate.

Birthday, Bob Smith, confessional, Men, The Write Side of 50

When you’re born, they start at zero, and count your age in days, weeks and months until you’ve completed a year of life, and you turn one. I was 59 on September 29, which means I’ve completed my 59th year on the planet, and my 60th year begins, today, on September 30. I’m not “in my 60s” as the term is conventionally used, but it’s close enough. Holy crap – suddenly I’m old.

I’m also retiring after nearly 30 years of practicing law – more than 26 of those with the same firm. It’s unsettling to be leaving a profession and a work environment that I know so well, but it’s also exciting to be setting out into uncharted waters. I’m not exactly sure what I’ll do – acting, writing, and travel all come to mind. But the important thing is that I’ll be defining what I do, and when I do it. And it doesn’t matter if I earn money at it or not. My last day at work is today, Monday, September 30.

Now that we don’t need to live close to any work site (my wife retired from her job in Nutley in December), we’re having renovations done at our former vacation home in Monmouth County, and will move there permanently in a couple of weeks. We did an extensive facelift of the house, including new siding and ground-level stone, the addition of a porch on the third floor, and upgrading the siding, railings and trim around the porches on the first and second floors.

We’re also adding a brand-new mahogany front door, with a stained-glass insert in the center, and stained-glass panels on either side. It’s replacing a double door that had a white aluminum frame and full glass panels – basically, a sliding glass door with handles and hinges. The new door, by contrast, is a work of art.

As with most renovations, this project has hit a number of snags – missing/slow tradesmen, late inspectors, delayed shipment of materials, machinery, and/or fixtures, rerouting pipes and ductwork to accommodate conditions unknown until the walls were opened, etc. The usual.

As a result, the projected completion date of July 30 has now been pushed to October something-soon. My builder won’t commit to anything more concrete than after the first, but before Halloween. Although the front porch and the steps leading to it have been rebuilt, the paved path that’s supposed to run between the porch steps and the sidewalk is still a pile of dirt. Nonetheless, the builder tells me he’s ready to install the new front door. It’s to be delivered, today, Monday, September 30, and installed on Tuesday, October 1.

That’s also my first day of retirement. And the second day of my 60th year. They say that when one door – or in this case, a couple of them – closes, a new one opens. We’ll see. 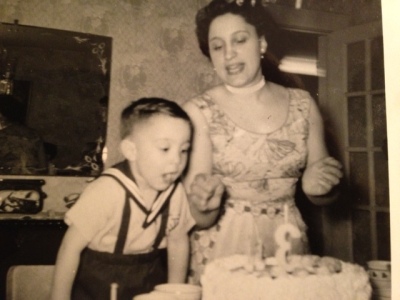 Fingers. We have 10 of them. So ancient people decided that our numbering system would be based on 10 – one number for each finger. I bring this up because it causes us to get all worked up about birthdays ending in a zero. Does turning 50 or 60 or 70 really mean anything? The answer is that it does for many people.

The first zero-birthday that mattered to me was when I turned 30. Having grown up at a time when we were warned not to trust anyone over 30, there was some trepidation at reaching that milestone. Turning 40 was a bit more traumatic. It’s the entrance to “middle age.” It would have been tough to take no longer being “young,” except that by this time, I had two young children, and I knew full well what young was.

I can honestly say that turning 50 was a big snore. Oh sure, it’s a half-century, and that sounds really old. And the AARP comes to claim you. But all in all, it’s no worse than turning 40. That being said, my body sure knew the difference between 40 and 50. Cancer,” the “Big C,” hit me at 52, and again at 57.

All this is apropos of my turning 60 today. I have survived a decade that was hard on my health. But I can truthfully say that I am as healthy today as I was when I was 40. So for me, the idea that turning 60 is a milestone is strange. I don’t feel any older. That is not to say that I won’t take advantage of the senior citizen discounts that will now come my way. I certainly will. (If I remember I’m 60.)

Back in the summer of 1967, the Beatles released Sgt. Pepper’s Lonely Hearts Club Band. I was 14, and was playing lead guitar in a garage band called, The Medievals.

We played local dances, and actually got paid for it. My band mates and I sat and listened to Sgt. Pepper’s as soon as it came out. On Side 2 was a song called, “When I’m Sixty-Four,” that imagined a distant future, and the uncertainty of love surviving. At the time, I couldn’t imagine a time 50 years into the future when I would be 64. Now, it’s just four years away.

When I started writing for this blog, I wrote an article about the sands of an hourglass, and the days of our lives. I have had 21,915 days so far. Some of them have been dull; some exciting. Some lovely. Some terrifying. Many of them have been memorable. On my 60th birthday, I look forward to several thousand more memorable days. On to 70!