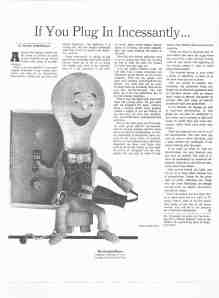 While many continue to suffer, Hurricane Sandy is just a memory for most of us now. But the one effect that just about everyone experienced was a loss of electricity. For some, it was just a day or two. For others, it was weeks. In my case, my house was without power for 54 hours. The signs of electronics withdrawal manifested themselves almost immediately.

Back in 1976, I wrote a piece for The New York Times about what I saw at the time as an addiction to electronic devices. This was before cell phones, MP3 players and even VCRs. The first commercially available personal computer, the Apple II, would not be introduced until the next year. So the electronic items I was writing about in 1976 were basics like televisions, radios and lights. The more exotic electrical uses were electric can openers, electric vacuum cleaners, electric ovens and electric toothbrushes. In my 1976 article, I labeled people who are addicted to electricity as “electroholics.”

Today, the loss of electricity is a very different matter. No electricity means no Internet, no DVD player, and no home phone service (since the phones now run on house current). We had a battery-operated radio during our Sandy blackout, so we could get news. But that was about it for electronic entertainment. Fortunately, today, we now have battery-operated telephones and iPads. But since the charge in these devices is quickly depleted, and there is no way to recharge them without electricity, we used them sparingly. I used the iPad to access e-mail, and the cell phone to talk with relatives.