Black Church, Brasov, Julie Seyler, The Write Side of 50, Transylvania

To continue where we left off, Steve and I were boarding the night train to Bucharest. This served a dual purpose. We didn’t waste a day traveling, and we had a cheap place to sleep for the night, albeit I was a bit more rested than Steve when we pulled in to the Gara de Nord the following morning at 6:00. We had an hour to kill before we were again en route, this time to Brasov, our home base for four days. From there we could make day trips to the places of note in Transylvania: Count Dracula’s Castle in Bran, Peles Castle in Sinaia and the medieval fortress towns of Sighisoara and Sibiu.

We arrived on a cold, wet day, and checked into the Casa Rozelor, an apartment hotel located around the corner from the town square on a pedestrian street. The exterior bears the markings of its roots in the 15th century and the interior bears the markings of an upscale design firm. It was comfortable and convenient. A plate of ham, cheese and salami would appear every night in the refrigerator so that we could make sandwiches for breakfast. That, and a bottle of beer was a perfect way to start the day. 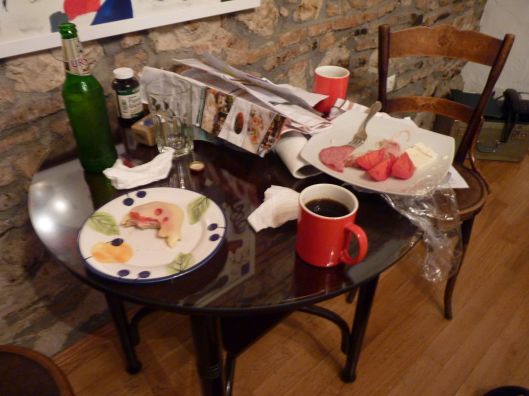 One really only needs a day to see the highlights of Brasov, but having additional time to wander allows its beauty and serenity to be imprinted on the psyche. The to-do list includes the 14th century gothic church, known as the Black Church because of the scars it retains from a fire in 1689. 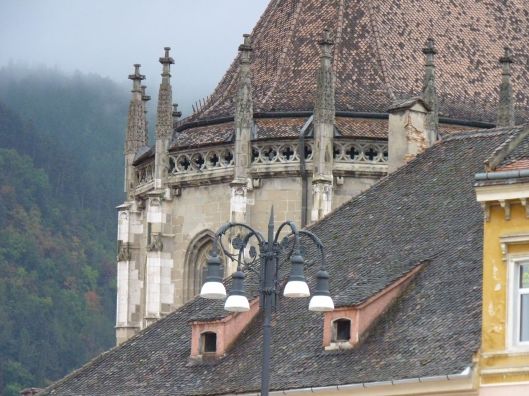 There is also the cable car up Mount Tamba to view the town and countryside. I missed it and have to rely on Steve’s photos to get an understanding of how truly pretty the view was. There are a few museums and medieval towers, but what made Brasov memorable was my aimless rambling. The sight lines were seductive. The city is in a state of continuous renovation. Some buildings looked as if they wore their age, others were carefully restored to what they may have looked liked when first erected. They were painted green, yellow and pink with 12 foot high windows framed with intensive scroll work and grand portal entrances protected by carefully wrought wrought iron.

If I looked up the rooftops created a maze of lines, space, and form.

If I looked across the street I might see a home restored to its baroque grandeur.

And if I kept my eyes focused on the scene around me, a panorama of the “old” world would appear.

Coming home from an excursion, I’d plop myself down in the cafe outside the Casa Rozelor.

And as I’d sip my beer I’d watch the reflections change in the windows. And for this I wish I had an Ursus beer right now and could transport myself back to Brasov.

Looking at a window.