Bread, Food, Julie Seyler, The Write Side of 50

There are bread people and non-bread people. Bread people eschew store-bought packaged brands as a tasteless waste of carbs, BUT completely justify gobbling up an entire loaf from their favorite bakery because of the divine indulgence imparted from well-baked kneaded flour.

Bread people swoon over seeing a loaf with a golden-brown crackly crust, while envisioning the crunch as that first chunk is ripped off to start nibbling on before they’ve even paid the cashier.

They debate the merits of this loaf: 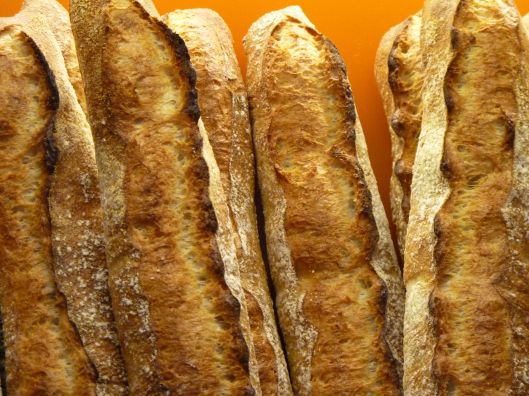 And if they can’t decide which is tastier, they buy both, and compare and contrast each until each loaf has vanished in their stomach.

And they definitely know not to buy one of these loaves:

The lack of pop, crackle and crust is all too obvious and sad.

I have been a bread person since, well, since as long as I can remember. I used to have the nickname, “Bread,” coined by one of my best friends in 5th grade. It may be a gene thing because the entire maternal line waxes romantically over baked dough. When my mother moved back to the city after a 50-year hiatus, she spent endless hours tracking down the best rye breads ever.

A bread person is lucky to live in Manhattan because of the cornucopia of establishments that feature fresh baked bread:

Anyway, this whole line of bread thought came to mind because a recent article in The New York Times reported the declining consumption of bread amongst the French. It has caused much so much consternation that the bread lobby organized a campaign to reinvigorate consumer desire in the baguette. The advertisements promote eating bread because it is “rich in vegetal protein and fiber and low in fat.” It is good for your social life, and most importantly, patriotic, because bread is the symbol of French culture and heritage. It is true that there is nothing more wonderful then wandering through the streets of a small village in France in the early morning while the aroma of bread wafts through the air.

So, while Parisians are being bombarded with the merits of eating bread, New Yorkers are going to court over the size of a soft drink cup. C’est la difference!