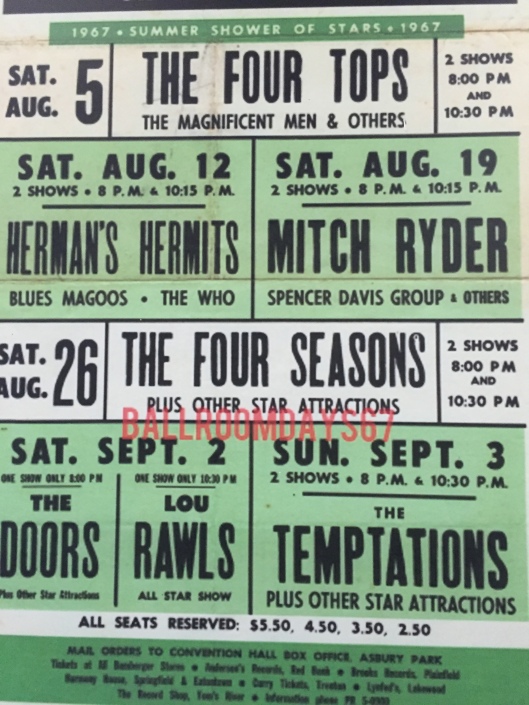 The doors leading into Convention Hall have been unlocked. On Saturday afternoon I wandered around. There were flying angels… 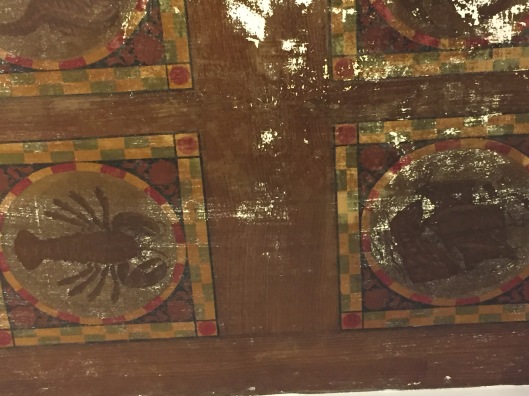 …and a ceramic stove someone must have imported from India that is not at all original to the building but still lovely to behold:

Here’s to the summers of the ’60s, when the age of 60 meant old like Mrs. Tashlick old. We were barely teenagers. 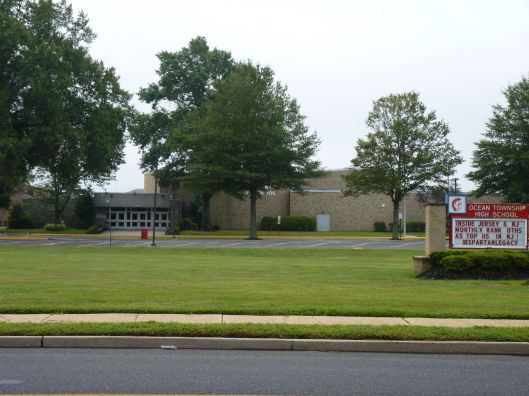 I graduated high school in 1973. We went to football games on Saturday afternoons, and spent many a Friday and Saturday night at the Rec Center.

Kingsley Avenue with the remnants of the Casino in the background.

In the summer, we cruised The Circuit, a continuous loop down Kingsley Avenue, past the Palace with its ferris wheel, carousel, and bumper cars.

We curved around, and traveled north, up Ocean Avenue leaving the Casino with its different carousel behind, and up to Convention Hall, where we seemed to play pinball games all night long. 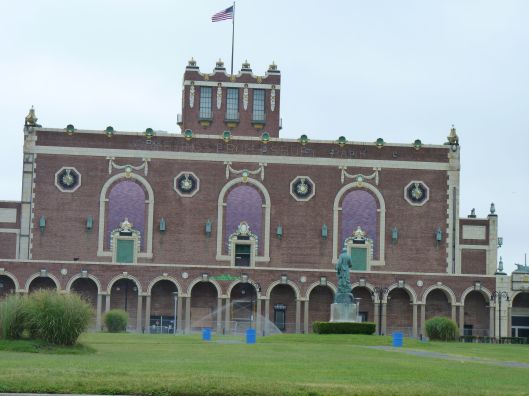 I worked at the Donut Shop and my friends worked at The Casino Coffee Shop.

Where the Casino Coffee Shop used to be.

We all seemed to have service industry jobs. I do believe, we believed, we were the luckiest people in the world. I moved onto college and law school – D.C. and Manhattan – but my mother continued to live at 615 Blanchard Parkway in Allenhurst, so I always went back “home.”

In 2010, my mother moved to Manhattan, and there went the anchor. But life is funny, or as Bob would write, everything happens for a reason. Years ago, I met Steve, and last year he decided to buy a house in Elberon, in Ocean Township, and I’m falling in love with where I grew up all over again.

I drive by the high school, and I see my girlfriend driving us into the side entrance every morning junior and senior year from the day she got her license as we listened to the 8-track tape deck blast music. I see the cheerleaders on Saturday afternoons screaming “Spartans Spartans, give me an S.” I see us being so impressed with how big the high school was after the petiteness of Dow Avenue.

Home of the Spartans.

I drive down Main Street, and look up, and there is the old YMCA building, and there I am, nine years old, jumping into the 1930s pool learning how to swim. 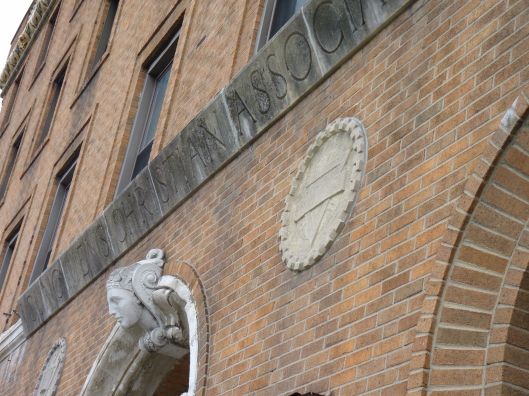 The Y is now an adult day care center, tattered and battered, and the pool is gone. But the smell of chlorine lingers, and so does some of the art deco fretwork that decorated the top lintels of the building.

Looking up at the YMCA.

I mourn the Palace, the Casino, the Mayfair and St James and Lyric theaters. Of course, there’s still The Wonder Bar and The Stone Pony, and the ghost of Mrs. Jay’s Beer Garden flits by. The pinball games we once played are enshrined, but working, in a Pinball Museum on the Boardwalk. I am thrilled the tent homes still go up every summer in Ocean Grove.

I see so much of my life through the lens of Ocean Township, and it just highlights in technicolor how fast it has all gone by. Everyone I grew up with has their slew of memories of Ocean Township and Asbury Park. It seems we love to take our trip down memory lane because there is/was something so comforting in our familiarity with each other, and the world we inhabited for that short time between the day we entered elementary school and graduated high school. 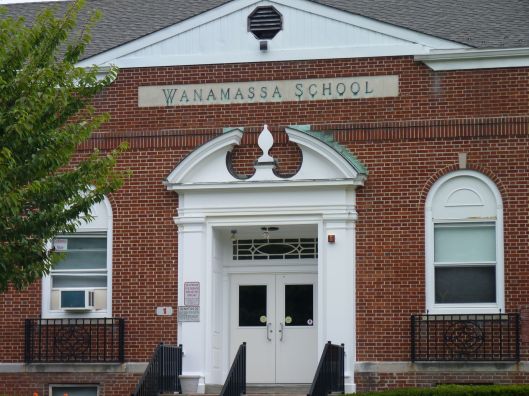 I started third grade at Wanamassa School 50 years ago. It was 1963. 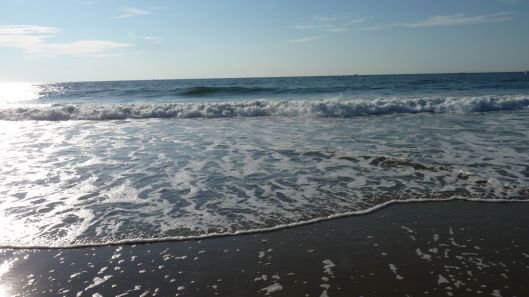 Summer. All photos by Julie Seyler.

For me, the coming of summer triggers walks down lanes dotted with memories; picture postcards of the past.

I step back to the summer of 1970. Endless days spent sitting on the beach with friends, and hanging out in the snack bar at Loch Arbor Beach listening to, “I Love You More Today Than Yesterday,” playing Hearts or Spades. Nights that began with a walk from the Casino, at one end of the boardwalk in Asbury, and ended with pinball at Convention Hall, at the other end, until one of our parents would arrive to take us home.

And even earlier than that, I remember bike rides to Allenhurst Pharmacy for hot fudge sundaes, and trips to the Palace to ride the bumper cars, the ferris wheel and the carousel. I would try to grab the gold ring as the horses spun up and down and round and round. Way before the riots took down Asbury Park, the Palace, which was Tillie’s home before the Wonder Bar saved her, was an extravagant indoor amusement park.

And earlier than that, it was about catching fireflies. An empty jelly jar in hand, I was out for the hunt.

Flash 50 years forward – I never see fireflies anywhere; the Allenhurst Pharmacy gave way to a dress shop 30 years ago. But the Casino has been rebuilt from a battered shell, and Convention Hall continues to shine forever true.

And, of course some things refuse to change. Summer weekends I am sitting on Allehurst beach, albeit no longer playing cards, but still hanging with my card-partners from way back then.

Still sitting on the beach with the same old crowd.

I believe the truisms (“share,” be “fair,” be “aware of wonder,” and “don’t hit people,” to name a few), as noted in Robert L. Fulghum’s book, “All I Really Need to Know I Learned in Kindergarten,” to be spot-on advice on how to grow into a decent, content, and essentially happy human being.

Add to these, the scholarship that comes with those early working years. Those first jobs. They not only may help you pinpoint what you want, or don’t want, to do when you grow up, but if you pay attention, they are also ripe with opportunities that can grant you what we all need to be decent at, content with, and essentially happy with our career choices.

For me, I knew in third grade that I wanted to be a writer. But I worked my way towards today through more jobs than I can count.

So here’s my short list of the basics on working as a writer, and how I got them:

Low wage: Those of us who grew up in Asbury Park in the 1960s and 1970s spent summers working on the Boardwalk. I did it for 10 years, starting at 14 years old as a counter girl at The Miramar Grill in Convention Hall. This was my induction into hard work at low pay. But it was also my premier tutelage in how to make my pennies count and get more for my money. After work, I would glom on to the 16 and 17 year old employees that would sneak through the secret tunnel alongside the restaurant and got us into neighboring Convention Hall during Led Zeppelin and Janis Joplin concerts for free.

Check your ego at the door: The next summer I moved across the hall and was Mr. Peanut at Planters Peanuts. I spent hours waving people in to the store with my unwieldy peanut head. Everyone who worked there started out this way, and if you were a cracker at being a peanut, you were eventually promoted to selling them inside the store.

Don’t cry when your editor yells at you: My three summers at the other end of the Boardwalk as a waitress at the Casino Coffee Shop is where I learned to be nice to people who weren’t nice to me. I would suck it up when the cook yelled that the food was getting cold, when the customers yelled that the food was cold, and when the boss yelled if I forgot to drip those three partially-used ketchup bottles into one at the end of the day.

Be honest: And it was also at the Casino Coffee Shop where I switched from concert-sneaker to concert-companion by treating the rock stars that performed at the Casino across the way, and regularly came in to eat, like rocks stars, so they would put me on their guest lists. (Leslie West, from Mountain, gave me a plastic, “World’s Best Waitress” trophy.)

Pay attention to details: After college, I moved down Ocean Avenue and worked as a waitress at Yvonne’s Rhapsody in Blue and Rendevous Lounge in Long Branch. Yvonne – owner, chanteuse, and drummer – would bang the drums set up in the corner of the dining room, and would throw her drumsticks into the crowd when she was done. Patrons that were upset with the near-miss-to-the-head would have been more unnerved had they known that the chef’s cigar ashes that would continuously bend towards, and then garnish the food, were accompanied by Yvonne’s fingers poking through every plate before it left the kitchen. I noticed that the clientel that hung out in the lounge under the restaurant had deeper pockets, and therefore tipped well. And there were no drums, no food, no Yvonne. I asked to work there, where I learned to chat up the mobsters that were regulars, like Anthony “Little Pussy” Russo, who took a liking to me, tipped up to 40 percent on his bills, and gave me an extra $20 bill if I would get him cigarettes from the machine.

Give people what they want, and deliver it reliably: I spent a summer as a bartender at a huge club – The Fountain Casino – where my constant attention in both mixing the drinks (a little extra booze), remembering what the regulars wanted (had it ready when they walked through the door), and smiling and winking at the inebriated, had them coming back for more, and made me more money in tips than I had made in any other job before that.

Work on deadline. Accept heaps of rejection. Be clear. And just say it already!: Short on length, but long on lessons learned – I sold encyclopedias door-to-door for one month in Hackensack. I had seconds to sell myself, and those books that nobody wanted. What began as a five-minute, carefully-chosen, beautiful, wordy spiel, turned into a one-minute, bordering-on-begging sales pitch, because people were slamming the door in my face.

Interviewing chops: I worked my way up to credit manager for a contractors supply company in my mid-20s. I spent the bulk of my day on the phone asking big wigs to pay us, please.

And sage instruction, no matter what:

Throw yourself out there, no matter your age, and do things that are really hard : I went back to school at 54 years old.

Learn how to move on when the best job in the world ends: My kids grew up.