Denmark, Doppelganger, Frank Terranella, Men, The Write Side of 50, Travel 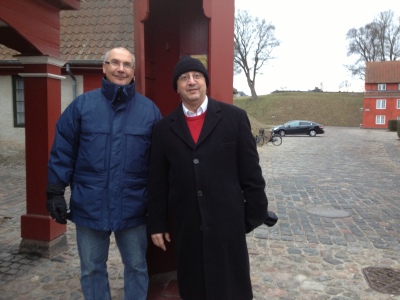 Thanks to an invitation to lecture in Copenhagen, I recently was reunited with my first cousin for the first time in 40 years. And here’s the kicker – his name is exactly the same as mine. Now, there are many people who have common names, and some with less common ones. I have a rare name. I don’t know of another person in the world alive today with the name Frank Terranella, except my cousin in Copenhagen. It was the name of our common grandfather, who died many years ago. I’m sure there are others, but I have never crossed paths with one. 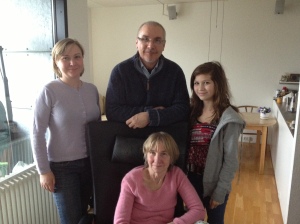 So how did my doppelganger end up in Copenhagen for the last 40 years? Well it’s a wonderful love story. My cousin went on his college junior year abroad in Copenhagen in 1970. There he met and fell in love with a beautiful blonde Danish girl named Karin, who stole his heart. They were married soon afterward. My cousin finished his education in Denmark, and then found a job as a teacher. Their daughter, Anna, came along a year later. Frank never saw a reason to go home much after that. Of course, that’s because he was home. And Copenhagen has been his home for the last 40 years.

Frank would visit the United States occasionally, but those visits were never in the New York area, so we never connected. As time passed, Frank’s daughter Anna grew up and gave him a granddaughter, Lea. She’s a teenager now, and I’ll swear that the 25 percent of her that’s American is dominant. Or maybe that’s just a function of the Internet, or American television on European youth.

So all this was going on a continent away, while I resolved year after year, decade after decade, to get to Copenhagen to visit the other Frank Terranella. Finally, I was asked to lecture in Copenhagen on United States trademark law. It was an offer I couldn’t refuse (even though lecturing is not something I’ve ever done). I knew it would give me the chance to see my cousin.
So my wife and I flew over to Copenhagen, and I gave my lecture. All went well. As soon as I was done, I called Frank. He came over to our hotel, and there we had the historic 40-year reunion. Both of us have a lot less hair than the last time we saw each other, but the ties of family are strong. It wasn’t long before we were telling stories of our youth, and bringing each other up to date on our lives for the last 40 years. It made us both smile – a lot.

Frank walked us back to his apartment where we met Karin. Now, when Frank’s daughter, Anna, was about a year old, he and Karin came to New Jersey to visit my grandfather, and I met Karin and Anna there. Seeing her 40 years later, her eyes and smile were just as bright as they were all those years ago, despite the fact that multiple sclerosis has now taken away her ability to walk. I recognized her immediately. She’s like a ray of sunshine, a grown-up flower child. It’s not hard to see why Frank gave up his home country for her.

Seeing my cousin with his wife was a testament to the fact that true love conquers all – including multiple sclerosis. I know that it sounds corny, but Frank and Karin are as much in love in their 60s as they were in their 20s. All that’s changed is that Karin requires a little more assistance than she used to, and Frank is more than happy to provide it.

The next day, I got to meet the now grown-up Anna and her daughter Lea. As do most Danes, they both speak flawless English. I am so sorry I didn’t get to see Anna grow up, but maybe now I’ll get to see Lea from time to time. We invited her to stay with us if she comes to America. Family reunions can sometimes be dreadful, but my recent trip to Copenhagen couldn’t have been a better experience. Reconnecting with Frank and his family made us forget the cold and often-dreary Copenhagen weather. We all resolved that we won’t wait another 40 years to connect again.