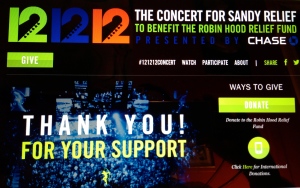 No matter how I slice it, dice it, or splice it, I have never cottoned to rock ‘n roll music.  I have tried on many occasions, because I think I am missing something important.  So of course, Wednesday night’s 12-12-12 concert in Madison Square Garden to aid the victims of Hurricane Sandy, which brought together a lot of the superstars of rock ‘n roll, was a perfect opportunity to again revisit the music. I would donate, watch and listen.

I know it seems like heresy to not love rock ‘n roll, especially since I grew up in the ’70s –  the heyday of Pink Floyd, The Who, Emerson Lake & Palmer, The Rolling Stones, and The Beatles.  Bruce Springsteen was just coming on the scene at the Stone Pony in Asbury Park, and while I lived in the next town over, I never made it there to see him.  I assume that every one of my high school classmates can recount endless nights spent at the Pony.  Hey guys – chime in here with the stories, because when the reminiscing begins, I must remain silent. Rather than rocking out to Cream and Led Zeppelin, I was busy immersing myself in Billie Holiday, which later developed into a tunnel devotion for all things jazz from Charlie Parker to Dinah Washington to Sarah Vaughan, etc. etc. etc.

Today I remain a jazz fiend, but I  appreciate all sorts of other genres like classical, Middle Eastern, early Renaissance, old-time country western.  And yet, I have never seemed able to cross that bridge to dig the crème-de-la-crème rock ‘n roll stars that topped the radio charts 50 years ago. (And yes, of course, there are some songs that I like.)

So on Wednesday evening I poured a glass of wine, and planted myself in front of the television.  Let’s just say, for me, Bruce Springsteen is amazing on every level.  He gave from the bottom of his heart to the heel of his soul.  It’s like watching someone turn themselves inside out for love, passion, compassion and sheer joy.  If all of this came through on my 30” TV screen, I cannot imagine what it must be like to see him live.

And Mick Jagger. I thought he was unbelievable at 69. Still so sexy and sensuous. A supreme ball of powerhouse musical energy and lust. I bet people who saw the Stones in a time way before their 50th anniversary tour can still brag about how they saw the best concert ever.  These artists blow away.  They must have been born with something intrinsically unique that led them to their destiny. And that they still do what they love with so much honesty – how can I not be filled with respect and awe?  But that being said, I still cannot seem to wrap my brain around the music.

I am just not a rock ‘n roll person – no matter how much I try.  Instead, just give me a small jazz club, a scotch on the rocks, and perhaps Chucho Valdes playing the piano.  I “get” that music.

1 thought on “He Rocks. She Rocks. Everyone Rocks Together. Except Me.”