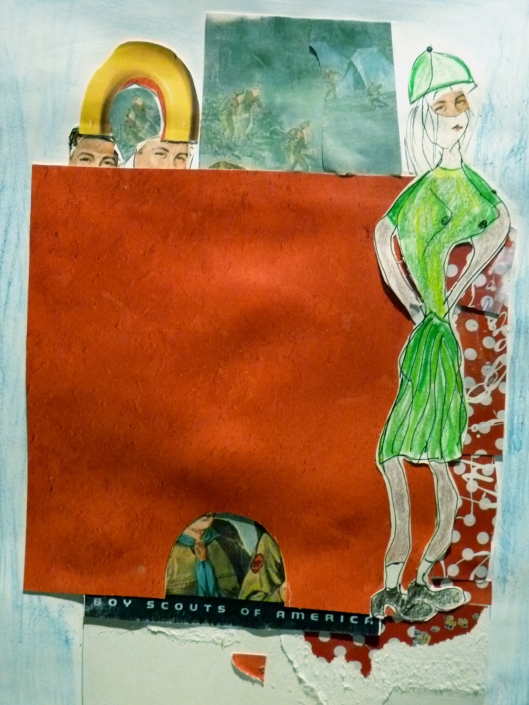 Scouting made a big impression on me during grade school and high school, but not in the ways you might think. In the early 1960s, when we were about 10, my brother Jim and I wanted to join the Boy Scouts of America, but Dad wouldn’t allow it. He was convinced that once we joined, they would expect him to attend evening meetings, chaperone weekend trips, and generally participate in our lives in a personal, up-close way. He said it would force him to quit his part-time job (which the family could ill afford), but we suspected it was as much because spending quality time teaching us wilderness survival skills might cramp his drinking habit.

So my brother Jim and I would sneak around the church where they held the meetings, and peek in the windows to see if we could find out what the Boy Scouts were up to. One night, we saw a group of boys gathered around someone’s father in the meeting room behind the church. The scouts had pivoted open a stained glass half-window for air, leaving a wide five-inch gap that gave us a clear view of the floor. They all wore matching khaki shirts and dark shorts with kerchiefs around their necks fastened with a gold Boy Scout cinch. Some of them wore military-style cloth caps, and even the grownup wore a neckerchief. He was holding a length of nylon rope, and appeared to be demonstrating how to tie knots.

“Yeah. Look at the scarf on that guy. Dad would never wear that.”

“Hey – what are you doing there?” The leader snapped as he walked briskly to the window, and slammed it shut.

Frantic, Jimmy and I scrambled out of the bushes and ran as fast as we could before a gang of scouts could pour out of the church like angry bees bent on testing their night tracking techniques. They never caught us, and we never went back. And we gave up asking for Dad’s permission to enlist. A few years later, the smartest girl in my high school class (let’s call her Eleanor) started wearing her Girl Scout uniform to school. This was a serious uniform – the kelly green beret with a pert nipple tip in the middle, starched matching denim shirt and sash festooned with handicrafts patches, and plaid pleated skirt. She rounded out the ensemble with clunky schoolmarm shoes, eyeglasses with pointed tips at the sides, and the coup de grace: white anklets with the day of the week script-stitched across the top. Crowds of sniggering kids, pointing and shaking their heads in amazement, would part like the Red Sea as Eleanor strode confidently down the hall, geek to the max. Apparently oblivious to the scorn and derision of the entire high school, she wore that outfit one day every week right through the end of twelfth grade. I secretly admired the incredible confidence it must’ve taken to do that, despite our relentless jeers. When I saw Eleanor at a recent reunion and mentioned her Girl Scout outfits with weekday anklets, she totally shrugged it off.

“Yeah. If you didn’t like it, you didn’t have to look,” she laughed. “Unless you weren’t sure what day it was.”

To this day, she remains a paragon of the I-don’t-give-a-crap-what-anyone-thinks merit badge, which is probably a sign of true genius. On the other hand, my brother and I still can’t tie a decent knot.