Bride, confessional, Jeannette Gobel, The Write Side of 50, Wedding 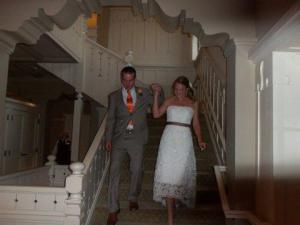 It’s my observation that an enormous chasm exists between the weddings and customs of my generation and current day. Nuptials have become a behemoth industry, with slick marketing that plumbs the depths of our emotions, insecurities, and expectations. No matter the size of the budget, it’s hard not to fall prey to the myriad of choices offered for the “big” day.

The engagement celebration of our daughter, Candice, and her boyfriend, Zac, was typical of their generation. On December 30, 2011, a romantic dinner was shared by the couple, followed by a stroll at Pike Place Market, then a surprise package left on a bench by a co-conspirator, and finally the genuflection and ensuing question. She blubbered through happy tears, a resounding, “Yes!” Moments after, both families joined the newly affianced couple for drinks and revelry at Etta’s Seafood restaurant. We were all involved in the night’s logistics and keeping the secret for three painful days, as Zac had asked for our blessing a couple weeks earlier.

When Kevin and I, the bride’s parents, decided to marry, we were alone in the car on the way to my parents’ home in November of 1977. We tersely agreed that, yes, we were ready to marry. I was 21 and Kevin was 23. I hadn’t finished college and Kevin was a newly employed computer programmer at the Boeing Company. We thought parental blessing was something out of the dark ages. Candice and Zac were older, and out of college by several years. They had also known each other since year one at the university. Kevin and I knew each other for 11 months. We knew it was right, and forged ahead with wedding plans. Our parents wished us well. No engagement party, or celebration was expected in 1977.

I was now the mother of the bride! From several sources, I learned that it was nearly required to attend the Seattle Wedding Show, which was the very next weekend. Immediately, I ordered four tickets, as we included Candice’s new mother-in-law and sister-in-law to be. The wedding show was an adventure, and Candice acquired way too much info. Who thought you could have a cake that resembled an oak tree for $3,600.00? Venues, dresses, jewelry, spa packages, linens, flowers, honeymoon destinations – all too overwhelming. Did these wedding shows even exist in 1978?

Dress shopping for me in early 1978 consisted of an afternoon at one bridal shop with my cousin. One basic dress, tried on, and that was it. It cost less than the bridesmaids’ dresses. And it wasn’t insanely frumpy – considering most wedding dresses from the ’70s.

For Candice, we assumed that we’d set an appointment for an afternoon at I Do Bridal in the Wallingford neighborhood of Seattle. I would not dream of missing this excursion with my daughter. At the conclusion of the expo, the four of us sauntered over to where dress vendors had set up. The third dress booth in, Candice and I reached for the same sweet dress. It fit her like a dream. “The” dress had been found. Even though we didn’t have our big dress shopping day, mother and daughter were together for the big purchase. I found it fascinating that both our dresses were simple, and neither of us desired a veil.

There was no question as to where Kevin and I would be married. I was confirmed in the Episcopal Church, and that was our venue. Religion thereafter was never a part of our lives, thus our little heathens were not baptized or affiliated with any organized religion. Needless to say, a church would not be the spot. Choosing a venue today is akin to deciding where to vacation – too many choices, say I. Candice loved the idea of getting married at the Woodland Park Zoo. After investigating several options, it was settled that the event would be held at the Seattle Golf Club, since the groom is a golf pro at a club affiliated with the Seattle Golf Club.

The next question was, “Who will perform the non-religious ceremony?” There were no less than one thousand names when I Googled: “Officiant, Seattle weddings.” Everyone knows someone today who can perform a wedding. An acquaintance of Candice’s was booked, and a personal ceremony was created by our young couple.

Thirty five years ago, we hadn’t heard of wedding planners. Our newly engaged pair had the tools and motivation to plan the entire event, as I happily wrote the checks. The kids made wise choices trying to stay within budget. My wedding was planned, and mostly paid for by myself. Both of our wedding days turned out perfectly.

The standard 1978 offering was cake, champagne, punch, and candy. Today you’d risk being called cheap with that menu. For my wedding, that is what I could afford. Fortunately in 2012, this bride’s parents could meet the expectations. Drinks, appetizers, and a plated dinner for two hundred filled the bill. There was a lovely wedding cake for dessert.

The photographs are the lasting memory of any nuptials. Costs for this service have risen just a tad since 1978. Our photographs were under three hundred dollars resulting in a nice photo album. In 2012, it’s the norm having all the day’s snapshots on a flash drive at about six times the price.

On the day of our daughter’s wedding, an eerie sense of déjà vu overcame me as a diverse mix of friends and family from all eras and aspects of our lives arrived at the club. As parents, Kevin and I were honored to witness such an audience, as I’m sure my parents were. This is what truly made both weddings special.

As the newly anointed Mr. and Mrs. Snedeker drove off in a mint-condition, 1965 orange Mustang, I pondered our two weddings, I see the generational differences, but both were wonderful days filled with loved ones celebrating the beginning of something special. After all, it really is the marriage that is paramount to the sturm and drang of expectations, customs and emotions.

Two months later, our only son became engaged to his lovely girlfriend. This wedding will differ vastly from our daughter’s. Mr. Gobel and I are most excited to participate from the “other side” this time, as parents of the groom.

2 thoughts on “Mother of (And as) the Bride”