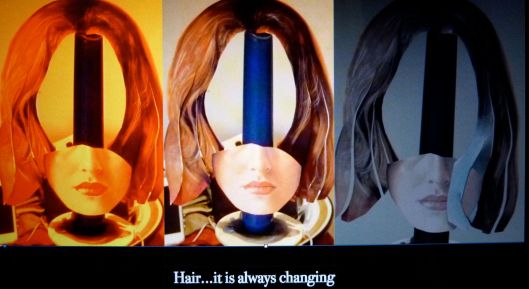 Hair…a mind of its own. Photocollage by Julie Seyler

BY JULIE SEYLER AND LOIS DESOCIO

The blog has weighed in on eyebrows, so why not meander onto other post-50 hair issues? Like the way it morphs into a foreign object in strange places (ear and nose hair, mostly on men), or pulls a disappearing act (where’d the hairline go?), or simply re-invents itself from a thick flow of trestly curls into a plate of limp spaghetti strands.

There are thousands of documented scientific, genetic, chemical, hormonal explanations for these unsuspected changes, but they do not cure the shock of the switcheroo. And just as you get accustomed to one specific change, such as adapting to fine hair after a lifetime of dense curls, it becomes even finer – so fine that if you touch it, it ends up in your hand instead of staying nicely in place on the top of your head. Aging is body betrayal on tiptoes.

Here, plucked from The U.S. National Library of Medicine and The National Institutes of Health, is the science that gets to the root of aging hair:

Hair thickness change. Hair is made of many protein strands. A single hair has a normal life between 2 and 6 years. That hair then falls out and is replaced with a new hair. How much hair you have on your body and head is also determined by your genes.

“… nearly everyone has some hair loss with aging. The rate of hair growth also slows.

Men may start showing signs of baldness by the time they are 30 years old. Many men are nearly bald by age 60. A type of baldness related to the male hormone testosterone is called male-pattern baldness. Hair may be lost at the temples or at the top of the head.

Women can develop a similar type of baldness as they age. This is called female-pattern baldness. Hair becomes less dense and the scalp may become visible.

As you age, your body and facial hair are also lost. But hairs that remain may become coarser. Women may lose body hair. Facial hair may get coarser, especially on the chin and around the lips. Men may grow longer and coarser eyebrow, ear, and nose hair.”

Phooey. It doesn’t have to be that way. Errant nose, ear, chin, and hand! hair can be plucked and snipped, shaved and sheared. But here’s the dirt on the hair on your head: Don’t wash it. You can still shower, of course. But just rinse. And run your fingers through it under the spout. Massage the oils out and throughout. Shun the shampoo part starting on Monday, and by Thursday, you will have the hair you had in your 30s. A little grease adds heft and sheen. There’s a reason that the hair follicles, those sebaceous glands, are full of natural oils. Keep any loose hairs in place by not brushing them. Instead: Scrunch. Tousle. Repeat.

And research supports that, along with good nutrition, exercise will keep hair healthy. So, hit the gym, steer clear of shampoo, and add some sweat to the grit. Skeptics might imagine that this combination would lead to nothing but a bad hair day of “limp spaghetti strands.”  No –  you will, instead, sport “a thick flow of trestly curls.”