As Time Goes By, Casablanca, Concepts, Frank Terranella, Herman Hupfeld, Men, The Write Side of 50 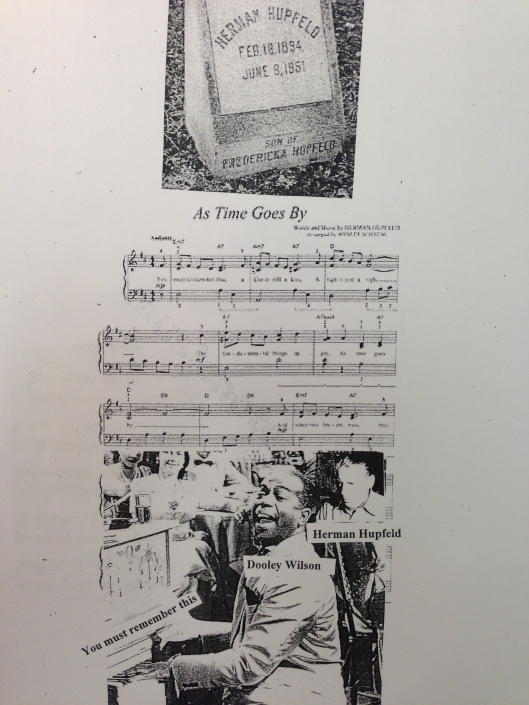 Herman Hupfeld will never be forgotten.

Earlier this year I attended a screening of “Casablanca” at the State Theatre in New Brunswick, New Jersey, with the New Jersey Symphony Orchestra providing the music. Max Steiner’s classic score never sounded better. But Max didn’t write the song that people remember most from “Casablanca” – the song that Ilsa asks Sam to play again. Max Steiner, for all his musical genius, did not write “As Time Goes By.” A man by the name of Herman Hupfeld did that.

Who, you may well ask, was Herman Hupfeld? He was the son of a church organist in Montclair, New Jersey. He began his career in 1912 singing his own songs in Ziegfeld’s Midnight Frolic. This was the after-hours entertainment that Florenz Zeigfeld staged after the Zeigfeld Follies on the roof of the New Amsterdam Theatre on 42nd Street. Hupfeld went on to serve in World War I as a saxophonist in the United States Navy Band. In the 1920s, he wrote songs for various Broadway shows. He was the “go-to-guy” for what they called “additional material.”

In 1931, Hupfeld provided additional material for a musical called “Everybody’s Welcome.” The show had a book by Lambert Carroll, lyrics by Irving Kahal, and music by Sammy Fain. Fain and Kahal wrote, “Let a Smile Be Your Umbrella,” and Fain went on to write, “Love Is a Many Splendored Thing.” But “Everybody’s Welcome” did not produce a hit for the duo. The hit of that show, which ran for 139 performances, was the additional material provided by Herman Hupfeld – “As Time Goes By.” Rudy Vallee had a successful recording of it.

Fast forward to 1942, and Hal Wallis is producing a movie inspired by the 1938 Charles Boyer, hit “Algiers.”  It’s based on an unproduced play by Murray Burnett and Joan Alison called, “Everyone Comes to Rick’s.” The screenplay adaptation by Julius and Philip Epstein has as a key plot-point, a song played by Sam, Rick’s pal and piano player, that used to be Rick and Ilsa’s favorite when they were in Paris together before World War II. Max Steiner tells Wallis that he would write a song for the movie. But Wallis feels that the song should be something old and familiar, a song that Sam actually would have played in the late ‘30s. The choice was Hupfeld’s, “As Time Goes By.” And the rest is history.

While the song became world-famous, Hupfeld remained in near obscurity at his home at 259 Park Street in Montclair, a short walk from the Watchung Avenue train station. Reports say that he rarely left his hometown. He wrote many other songs with titles such as “When Yuba Plays the Rhumba On the Tuba,” A Hut in Hoboken,” and “Let’s Put Out The Lights (And Go To Sleep).” He died in 1951 at the age of 57. He’s buried in the Mount Hebron Cemetery in Montclair.

While few people remember Herman Hupfeld, his creation lives on in film history. It’s safe to say that a century after his death, people will still be echoing Ilsa’s request, “Play it Sam. Play,`As Time Goes By.’”