I’m not much for tchotchkes, but we’ve got a set of ceramic salt-and-pepper shakers that’s close to my heart.

You’ve probably seen them, or some version of them: it’s a married couple, in “Before” and “After”poses.

“Before” shows the couple young, happy, and dressed for their wedding day. He looks handsome in his gray tuxedo and red bow tie, sporting a mustache and glancing sidelong at his rosy-faced bride. She stands proudly in her white wedding dress and headpiece, with golden curls spilling out the sides, demurely holding a bouquet at her midsection. Her lips are pursed in a hopeful smile and her blue eyes gaze brightly ahead, focused on the future.

When you turn the figurines around, the legend on the bottom reads “AFTER,” and the changes are striking. 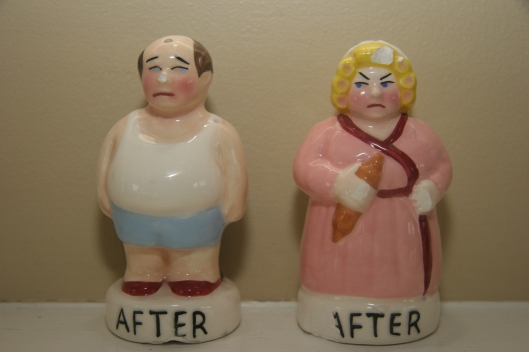 The groom is now wearing a strappy T-shirt and boxer shorts, and he’s  gained at least 30 pounds. Frowning, he’s lost most of his hair and the dapper mustache, and he’s glancing sheepishly at his wife as if expecting recriminations. She, too, has gained a few pounds, as evidenced by her jowly face and plumper middle. She’s wearing a bathrobe and curlers in her hair, and instead of flowers she holds a rolling pin. Her young bride’s optimistic smile has been replaced by a scowl as she glares at her spouse, apparently considering where to slug him, and how hard.

I bought these when Maria and I had been married around twelve years, when we weren’t far removed from the “Before” picture of the happy couple. We’ve been displaying them on the windowsill over the sink for the last 20 years, and I’ve since come to identify with – if not resemble – them more and more.

They’ve taken a beating over time – his hair, and her veil, are badly chipped on the “Before” side, and both of their noses, “Before” and “After,” have been marred by falls from the window ledge. We, too, bear scars from our three decades of life together. And like the figurines, neither of us is in quite the shape we were when we were married, but we’re still standing.

Sometimes I’m in a miserable mood and she’s just fine, the “Before” to my “After,” or I’m feeling just fine and she’s in the dumps. We can arrange the figures accordingly. 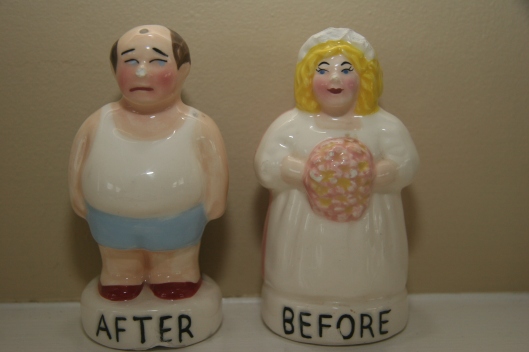 But usually the couple on the windowsill isn’t mired in “After.” They’re facing front, smiling warmly in their wedding regalia; a much more pleasant image. Like our ceramic counterparts, we’re hopeful we can carry on living happily ever “Before.”