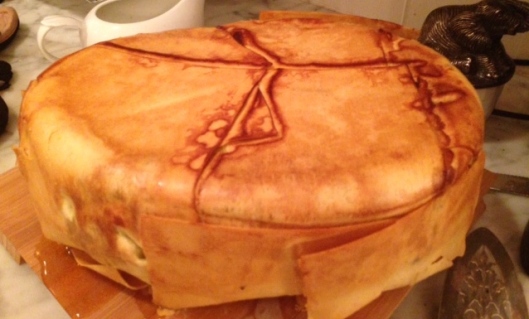 After three attempts, in as many years, I believe I have conquered timpano — that barrel-shaped feast of encased noodles, salami, cheese, pork, beef, ragu, hard-boiled eggs, and star of the 1996 movie “Big Night.”

I wrote about my second attempt in 2012. (The first attempt was not worthy of documentation.)

So when I read New York Times food writer, Melissa Clark’s tweaked timpano recipe from December 11 (see below), I was inspired to go for a third round over the holidays. Clark mixed and nixed, modernized and molded an easier, less labor-intensive timpano.

But I was torn. Making timpano is a feat you don’t mess with. I have learned from first-hand experience and as is evident in the movie, it is an event that is supposed to be nothing short of a mix of religious exultation and traumatic sweat — a recipe for stress and science as you chop, slice, toss, stir, wrap and bake with a bow to the ingenuity of the ingredients and salutation to the artistry of the finished product.

There’s the mess on the counter. Arithmetic is called for. You salivate as you combine a bunch of things that you may never have thought could be combined into what becomes an unwieldy mound that then has to be wrapped in dough and baked and ultimately burnt at least two times before you get it right.

… I tweaked Clark’s tweak. And because of the merging of her talent and deft with my reckless abandon in the kitchen (because I’ll eat anything) — I finally nailed that drum.

Clark substituted savory roasted butternut squash for the hot hard boiled eggs from the original. I followed her lead, but I wish I had used both. (The addition of roasted squash, though, was sublime.) Also, instead of wrapping it all in dough, she used fresh pasta sheets, which makes for a gigantic, layer-free lasagne, as opposed to an upside-down (not pie-shaped) over-stuffed pizza. In retrospect — give me pizza.

I used broccoli and garlic instead of her broccoli rabe (no strings attached), I substituted honey for nutmeg, and I shoved some mini meatballs in there along with three kinds of homemade (from the local pork store) sausage. (You must never, ever eliminate meatballs. Never.)

And instead of salami OR prociutto, as Clark suggested, I went with salami AND prociutto. Clark took out the pecorino romano — I kept it in.

The one mess-up is that my recent triumph at timpano will for the most part remain in limbo, mainly because I didn’t write anything down, and couldn’t read a good portion of what I did write down. Most of what I’ve written here came from memory after drinking wine and eating timpano.

Here’s the original Big Night Timpano recipe, which takes a labor-intensive five hours to make.
Here’s Clark’s, which she professes to be a “faster and easier” four hours.

I can’t calculate how long it took me, but “faster and easier” and me and timpano didn’t mix (partly because of the frantic Christmas Eve-morning search for fresh pasta sheets). But I do believe my third try gave a nod to Clark’s modernity and a bow to the integrity of the original. And props to me for messing with the pros while maintaining palatability. And I didn’t burn it. 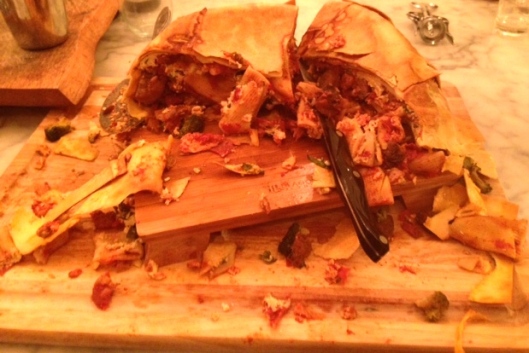